Sunoco failed to disclose some risks of Mariner East pipeline, was ‘negligent’ in response to concerns, judge rules

The ruling was far from a total victory for residents and local officials who had, among other things, sought additional measures to protect children, older people, and those with disabilities. 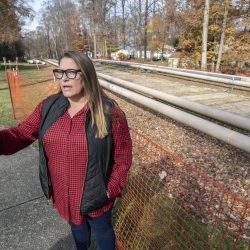 Photo: Rebecca Britton, a school board director for the Downington Area School District and founder of the Uwchlan Safety Coalition, was one of several residents who contended that Sunoco, the operator of the Mariner East pipeline system, had failed to properly inform nearby residents and emergency responders of all of the risks should an accident occur. MICHAEL BRYANT / Philadelphia Inquirer

HARRISBURG — In 2018, the superintendent of a Chester County school district wrote to Gov. Tom Wolf, beseeching him to conduct a risk analysis of a pipeline system called Mariner East, running volatile, natural gas liquids roughly 500 feet from some of her schools. The district, she said, did not know how to safely evacuate its 3,400 students should an accident occur.

This month, almost three years later to the date, a judge in a case brought by residents of Chester and Delaware Counties found Sunoco, which operates the pipeline system, had failed to properly disclose all of the risks posed by a potential leak or rupture, and was “intentional” and “negligent” in refusing to meet with local emergency officials in need of more information.

In the 212-page ruling, administrative law judge Elizabeth Barnes for the Pennsylvania Public Utility Commission found that Sunoco — a subsidiary of Dallas-based Energy Transfer, a $33.8 billion company with 90,000 miles of pipelines in the U.S. and Canada — had violated several state and federal regulations.

According to the decision, it failed to disclose risks such as “property damage, personal injury, asphyxiation, burns, death or fatality” in its public information mailers. Similarly, in mailings to emergency responders, the company failed to properly disclose the hazards of a leak, in particular the possible ignition of a chemical vapor cloud that could result.

Natural gas liquids are uniquely hazardous. They are colorless, odorless, and heavier than air. When the chemicals leak, they expand rapidly, pooling low to the ground in a flammable mist that can be difficult to detect.

“In both mailers, only the hazard of possible ignition of (highly volatile liquid) is lightly touched upon and that the product in the line can be a skin irritant,” Barnes wrote.

The judge’s findings were consistent with those of a year-long Spotlight PA investigation of emergency preparedness along the Mariner East system, which spans 350 miles under 17 southern Pennsylvania counties. The investigation found secrecy and a patchwork of emergency plans have left communities in the dark about what to do in case of an accident.

» INTERACTIVE: Explore the Mariner East pipeline system and its history

Barnes ordered Sunoco to update its public information pamphlets to reflect the significant ramifications of an accident, update emergency notifications to include police departments and school districts, as well as share non-confidential inspection and testing reports with local officials.

The company was also ordered to meet with local stakeholders to develop additional emergency training, to share emergency planning documents, and to ensure all of its pipelines are spaced far enough from other underground pipelines or utilities and buried at a safe depth.

The ruling was far from a total victory for residents. Barnes noted in the decision that Sunoco had “implemented a public awareness program mostly consistent with its plan.” She also said there was not enough evidence or legal jurisdiction to grant key actions residents had sought, including to move pipeline valve sites, which control the flow of gas, or to shut down pipeline operations altogether.

The judge also did not address many of their safety concerns, like adding scent to the pipeline chemicals or mass emergency notification systems. Instead, Barnes suggested these problems could be addressed through an ongoing utility commission rule-making, in federal court, or by the state legislature.

Lisa Coleman, a spokesperson for Energy Transfer, Sunoco’s parent company, said they are pleased the judge ruled in favor of the pipeline’s continued operation in Delaware and Chester Counties. She said the ruling affirmed the safety of transporting natural gas liquids by pipeline, compared to railway or truck transport, but did not comment on the violations.

The ruling was the latest in a long line of violations and fines levied against Sunoco for its construction and operation of the Mariner East system. The state has already fined Sunoco roughly $16 million for environmental violations, including numerous issues with water contamination and sinkholes that occurred during construction.

Sunoco has long contended that local governments, under state law, are in charge of planning for emergencies, but Barnes found that its representatives had been unwilling to meet with schools and first responders in the face of reasonable requests for help.

The ruling came after several weeks of hearings in 2019 and 2020, in which residents of Chester and Delaware Counties showed pictures of exposed pipes, some carrying chemicals, visible in the dirt of shallow river beds. School leaders and county emergency planners testified the company withheld valuable information that could help keep children or the public safe.

Some of the plaintiffs, commonly referred to as the “Safety Seven,” said they felt a muted victory, seeing many of their concerns affirmed by the judge after years of lobbying for transparency.

“It took three years, but we got there,” said Laura Obenski, who lives 700 feet from the Mariner East route in Chester County and has two children in nearby schools.

She, along with attorneys and community advocates, said the ruling was disappointing because it still places much of the burden to enforce the order on local communities, and it only applies to the two counties. In Pennsylvania, there is no centralized, statewide blueprint for communities to follow for potential accidents with such a pipeline system, creating inconsistent and uneven levels of preparedness from one county to the next.

Attorneys for the residents said the ruling exemplified hurdles members of the public face when they present any case against powerful utility companies operating across federal, state, and local jurisdictions. The burden of proof is difficult without access to complete information, and in the face of laws that give companies like Sunoco wide latitude to keep details — such as the blast radius should an explosion occur — confidential.

In Pennsylvania, Sunoco frequently cites a law passed in the wake of the 9/11 terrorist attacks to prevent the release of safety information key to developing a robust emergency response. The law gives state regulators and the public little recourse to challenge such secrecy. State Public Utility Commission officials have conceded they have little oversight, and can’t say how many times documents have been deemed confidential and withheld by utility companies.

“What you have is the fox owning the hens,” said Rich Raiders, an attorney for the Andover Homeowners Association, a Delaware County community that abuts the pipeline and is an intervenor in the case. “And the hens are helpless.”

Barnes acknowledged this challenge, citing in her decision the testimony of Chester County’s deputy director of emergency management, Bill Turner, who said that despite attending numerous Sunoco meetings and trainings, he did not have enough information to plan for a serious accident. Sunoco provided boilerplate information via PowerPoint and the company would not allow its internal emergency response plans to be viewed or referenced in trainings, he said.

Barnes also noted the company has a responsibility to assist in emergency planning, even if it is not explicitly required by law or regulation.

“Stakeholders such as emergency planning agencies, first responders, residents, school districts and municipalities are confused and concerned and are seeking information necessary to protect themselves and their communities,” Barnes wrote, finding the criticisms of Sunoco credible. “With the right to do business in Pennsylvania comes responsibility.”

In requiring the company to meet with schools and first responders to help develop emergency plans, Barnes emphasized a state law, signed by Wolf in November, that allows emergency planners to request documents from the company or utility commission as long as they abide by non-disclosure agreements.

School officials told Spotlight PA this is still limiting because they cannot use confidential information in actionable, public plans.

As part of its investigation, Spotlight PA calculated that up to 345,000 people statewide could be impacted by a leak or serious accident, as well as up to 340 schools, child care centers, places of worship, and mobile home parks.

Sunoco advises people to leave uphill on foot and not operate a cell phone until they reach a safe distance, but does not say in public mailers just how far is safe from the pipeline in an accident, or how to protect people with disabilities, children, and elderly individuals with limited mobility.

“There is a considerable amount of credible testimony and photographs showing individuals with disabilities residing in close proximity to the Mariner East pipelines will take considerable time to escape,” Barnes wrote.

But requests to help resolve these issues — add an odorant to the natural gas liquids in the Mariner East lines, or implement a public alarm system to help notify people — would need to go through a new regulation process, she said, or be dealt with in federal court, which is the proper venue to hear claims under the Americans with Disabilities Act.

The residents who brought the case and their attorneys said the Public Utility Commission was side-stepping its responsibility to keep residents safe.

“It feels like this is not a position that ordinary community members should have to be in,” Obenski said. “And the fact that we have to continue to point out the state’s obligation to provide for safety and the operator’s obligation to meet certain standards, it feels really misplaced.”

Christine Marshall lives at the Hershey’s Mill retirement community in Chester County and is a legal guardian for her sister, Laura, who relies on a wheelchair and has partial use of one arm following a car accident in 1986.

Evacuating Laura in a pipeline accident, Marshall said, could take an hour, far longer than the minutes it can take for a leak to find an ignition source. Also, Marshall’s husband, Jeremiah, has Parkinson’s Disease and would also need help evacuating.

“The most vulnerable among us are at greatest risk from this ruling,” she said, requesting that lawmakers and the governor intervene. “To alert us to the inherent dangers does not solve in any way the issue of escaping those dangers once they occur.”