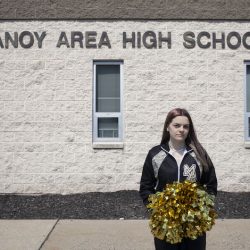 Can a school discipline students for things they say outside of school?

The U.S. Supreme Court will consider the question in a Pennsylvania case.

In 2017, a high school sophomore was kicked off the Mahanoy Area High School cheerleading squad for posting a picture and text online the school district believed to be “negative,” “disrespectful,” and “demeaning” about cheerleading.

Sara Rose, senior staff attorney for the ACLU of Pennsylvania, said courts have ruled schools have broad powers to discipline students for speech considered disruptive when they are in school, but this student’s Snapchat message was posted on a Saturday and sent only to friends.

A brief filed by the school district claims schools should be able to treat students alike when the disruptive speech is directed at the school no matter where it originates.

Some appellate courts have ruled students can be punished for speech outside of school. But Rose pointed out that, in this case, the Third Circuit Court of Appeals was the first to limit that disciplinary power.

“They said when the speech is not harassing, threatening or bullying normal First Amendment standards apply,” Rose recounted. “You don’t apply this standard that’s really deferential to school officials when the kids are outside of school.”

She noted all but one of the other off-campus student free-speech cases involved speech that could be considered threatening or harassing.

In 1969, the Supreme Court ruled schools can punish students for speech in school that materially and substantially disrupts school activities.

Rose pointed out in this case, the school is asking the court only to rule that it can apply that standard to speech outside school.

“If the court were to rule that, they’ve asked them to remand the case back to the Third Circuit to make findings on whether our client’s speech caused a material and substantial disruption,” Rose outlined.

She added 24 organizations, ranging from conservative religious groups to civil-rights advocates, have filed amicus briefs on behalf of the student in this case.