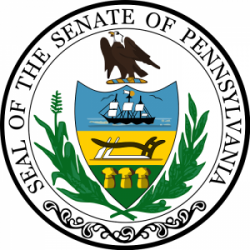 By a bipartisan vote of 43-4, the Senate passed legislation to amend the state constitution to change how the lieutenant governor is selected in Pennsylvania, according to Senator David G. Argall (R-Schuylkill/Berks), the prime sponsor of the bill.  This legislation would more closely align the current process of selecting the lieutenant governor with how the Vice President is selected during federal elections.

“The two top members of our executive branch should always work as a team and have a unified vision for Pennsylvania,” said Argall.  “We have seen in the past how our current system can create conflict, such as the embarrassing public rift between Governor Wolf and former Lieutenant Governor Mike Stack that saw both individuals openly admitting that they didn’t speak to each other for weeks at a time. This is unacceptable. Pennsylvania taxpayers deserve better.”

“My church wouldn’t function well with the two leaders clashing every day.  My son’s old Scout Troop didn’t operate like that.  My daughter’s soccer team couldn’t have won any games with that kind of leadership.”