A state department said a licensing program with financial and safety requirements for recovery homes will save lives, but advocates are pushing back on the added costs. 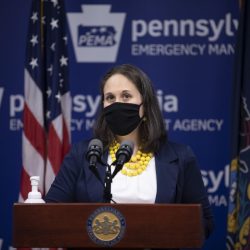 Photo: The amount of feedback, as well as the coronavirus pandemic, contributed to the Department of Drug and Alcohol Programs missing a June 2020 deadline to implement the licensing program, Secretary Jennifer Smith said during a February budget hearing. Commonwealth Media Services

But recovery advocates and elected commissioners in the Philadelphia suburbs argue the costs could backfire by overburdening house operators and making high-quality and affordable living options inaccessible.

At the center of the debate is a voluntary licensing system, first mandated by Pennsylvania lawmakers in 2017, the Department of Drug and Alcohol Programs has struggled to implement in a timely fashion.

In March, the agency released regulations that would require recovery house operators who want a state license to pay a $250 fee each year as well as an estimated $10,000 annually for a financial audit. Some operators would have to pay for physical upgrades, such as acceptable fire exits. Operators would also have to provide proof of zoning approval and criminal background checks for all staff and volunteers.

The state needs stricter oversight, the department said in the proposal, to deal with “a recent influx of unscrupulous individuals who seek to enrich themselves by exploiting those in recovery.”

But William Stauffer, executive director of the Pennsylvania Recovery Organizations Alliance, said it is too far reaching and burdensome for owners, and would push more people to live on the streets.

“The vicious cycle of relapse and loss will continue for far too many of them,” he wrote in a public comment on the plan. “Many more lives will be lost.”

Pushback from Stauffer and others prompted the administration to withdraw the plan in early April, just days before a commission that reviews proposed state regulations was set to vote.

Despite the delays, the department is still preparing to roll out the licensing system this year, an agency spokesperson, Ali Gantz, told Spotlight PA. Officials haven’t committed to any specific changes, she said, but are reviewing feedback.

The Department of Drug and Alcohol Programs has a broad mandate to address Pennsylvania’s opioid crisis and regulate licensed addiction treatment facilities. But as an investigation by Spotlight PA and KHN found, it lacks resources and regulatory power and uses an inherently flawed oversight system that does little to ensure high-quality or effective care.

It also rarely takes strong disciplinary action against facilities when so many Pennsylvanians need services. That was the case with Addiction Specialists Inc., which was raided by the FBI in October 2015 and eventually shut down because of a bankruptcy case. The operators of that facility are now involved in a recovery home business where at least one person has died of an overdose (they deny any wrongdoing for their recovery home work).

There is agreement among advocates and state officials that some owners exploit people who turn to these homes at vulnerable points in their lives, at times providing few rules and little support, and putting residents at greater risk of using drugs.

But they disagree about the best way to increase safety.

“It’s sort of like a Goldilocks situation,” said Stauffer, whose organization advocates for people in need of addiction recovery services. “If you do too much or you do too little, it actually will end up with the same result.”

That same result? No real protection for people in recovery.

Excessive oversight, Stauffer said, will force operators to pass increased costs onto residents who can’t afford to pay them. Many residents can often put everything they own into a plastic bag, are seeking minimum-wage work, and face a host of challenges, Stauffer told state officials in March, and they will be forced to move into cheaper and unmonitored houses — ones not interested in a state license.

Still, recent history has shown too little oversight can enable house operators to exploit vulnerable people. A now-closed Bucks County-based treatment provider, Liberation Way, used recovery homes as part of an elaborate money-making scheme “to the detriment not just of the insurers, but of the patients themselves,” a statewide grand jury report alleged in 2019.

The Department of Drug and Alcohol Programs initially released a draft of the proposal in May 2019, and received more than 60 letters and emails in response. Many of those comments came from people concerned about the costs and burden of it, according to a review of the submissions, which the department provided to Spotlight PA after a Right-to-Know request.

The amount of feedback, as well as the coronavirus pandemic, contributed to the agency missing a June 2020 deadline to implement the licensing program, Secretary Jennifer Smith said during a February budget hearing.

“I appreciate the frustration I hear in your voice,” Smith told State Rep. Meghan Schroeder (R., Bucks). “And I think we as the department have experienced some of that frustration, too.”

The department released a new proposal in March, noting that Pennsylvania has one of the highest drug overdose death rates in the country and that people with substance use disorders are more likely to overdose without adequate support. The department said there are an unknown number of recovery homes “providing low-quality to no supportive services, committing insurance fraud, and exploiting vulnerable populations.”

The licensing program would be voluntary, but there are incentives. The 2017 law prohibits state agencies and state-funded facilities from referring people to unlicensed homes, and only licensed facilities can receive federal or state money for recovery housing services. Licensed homes will also receive priority for referrals when someone is under court supervision.

The department estimated 500 recovery houses would seek a license.

Bucks County commissioners, the National Alliance for Recovery Residences, and others objected. In an April 1 response, the Department of Drug and Alcohol Programs pushed back against some criticisms, clarified its position to address others, and said it was willing to compromise on some issues. It will consider exceptions to the annual audit requirement, based on how much revenue houses receive, officials said in the response. The agency is also working on a plan to provide grants to help pay for brick-and-mortar upgrades.

But objections continued. Fred Way, executive director of the Pennsylvania Alliance of Recovery Residences, wrote it was “incredibly hard to believe” that 500 homes could afford the costs associated with a license.

Donald Driscoll, an attorney for the Community Justice Project, a legal assistance nonprofit, said the language in the proposed regulations and the administrative burdens would encourage municipal leaders to challenge the existence of these recovery homes. That will lead to more zoning hearings, citation cases before magisterial district judges, as well as “critical time delays and extraordinary legal expenses,” Driscoll wrote.

On April 9, the department announced it was withdrawing the proposal, so it could “thoroughly review these concerns.” It’s preparing to resubmit a plan in time for a June meeting of the Independent Regulatory Review Commission. And the department is preparing to enforce the licensing system by December, a goal the department laid out earlier this year.