Danny Bouc, who became a regular at the 1/3-mile banked clay oval this season after hooking up with Norm Hansell to pilot his No. 357 in the Modified ranks took the lead for good from Brad Brightbill on the 19th lap and went on to take home the checkered for first first career win. This was quite an improvement over his 27th place finish the previous week. Bouc was very thankful that Norm took a chance on him and he was more than ready to prove that he was up for the challenge. 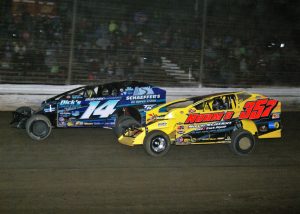 Brad Brightbill (14) has nothing for a speeding Danny Bouc,who went on for the modified win

Sportsman action saw young Decker Swinehart go the top line to take the lead away from Bryan Rhoads with five laps complete and hold that spot until the wave of the checkered to chalk up the victory.

Bouc and Swinehart both received the Dan’s Deli ½-way hoagie award and Swinehart also earned a monetary bonus for being the highest crate engine finisher.

Polesitter Brightbill held the early lead at the onset of the Modified feature and within a matter of laps Brightbill, Eric Biehn and Bouc were engaged in a three-way battle for the lead.

A homestretch tangle that brought out the yellow on the sixth lap eliminated Doug Manmiller, Kevin Graver and Ron Haring Jr. Manmiller took a pretty good jolt into the wall and walked away very slowly under his own power. Brightbill was still in first when action resumed with Bouc giving him no room to falter.

Bouc took over the number one positon on lap eight leaving Brightbill, Biehn, Jack Butler and Timmy Buckwalter, who invaded since his regular Saturday night track didn’t include his division coming from 15th; in pursuit after Bouc checked out. 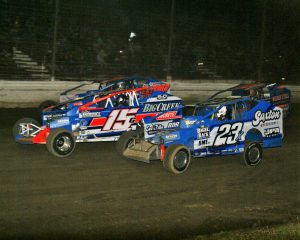 Timmy Buckwalter (23X) makes a lowside pass of Duane Howard (15G),Brad Arnold and Ryan Grim on his way to a 3rd place finish

Lap traffic was on the horizon by the 16th lap while the order continued to be the same. Trying to break into the top five was Craig Von Dohren.

Justin Grim bobbled a bit coming off turn four which set up a chain reaction and Brad Grim became involved and spun for the final yellow on the 17th lap. At the same time Duane Howard went pit side and never returned. On the restart Bouc hesitated enough and that quick Brightbill took advantage of it and pounced back in front. It was short-lived however as one lap later Bouc was first again.

Coming to the front fast was Von Dohren as he was second on lap 22 trailed by Brightbill, Buckwalter and Butler. Waiting in the wings just anticipating a miscue so they could advance positions were point leader Brett Kressley and Jeff Strunk. 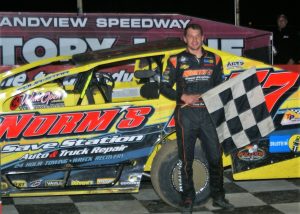 In the closing stages Von Dohren came on strong since Bouc was starting to fade, but it wasn’t enough and Bouc went on to score a crowd-pleasing win. Finishing a close second was Von Dohren followed by Buckwalter, Kressley and Strunk. Sixth through tenth were Brightbill, Louden Reimert, Butler and last week’s winner Jared Umbenhauer.

In Sportsman action Rhoads was the early pacesetter until the fifth lap restart needed when Tyler James, Mark Kemmerer and Mike Laise tangled for the yellow. On the restart Swinehart took to the outside groove and advanced into first. 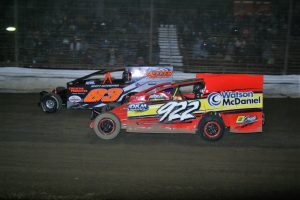 While Swinehart set the pace, the battle brewed behind him between Cody Schantz, Joey Vaccaro, Rhoads, and Ebby Ridge.

At the ½-way point Vaccaro took over second and set sail after Swinehart who had a slight margin built up.

Mike Laise regrouped the pack when he came to a halt on the 21st lap. They were all bumper-to- bunper for the single file restart and Swinehart was still at the head of the pack. 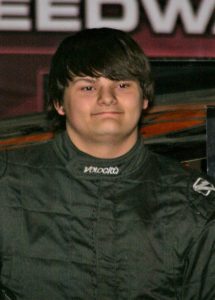 Swinehart never looked back once he was in control until he pulled into the winner’s circle. Chasing him across the finish line were Vaccaro, Rhoads, current point leader Kenny Gilmore and Schantz. Rounding out the top ten were Kyle Smith, Kyle Lilick, Ridge, Brandon Edgar and Lex Shive.

Heats were won by Chris Esposito, Rhoads and Gilmore. Lilick won the consi.

LOOKING AHEAD
Coming up on Friday, May 7th, at 7 p.m. is Outlaw Racing Series Enduro and Vintage Racing action.

On Saturday, May 8, 7:30 p.m. the 602 Sportsman Mini-Series returns to action along with the Modifieds and Sportsman. It will be Mom’s Night with the first 50 Moms getting a free gift. The oldest and youngest Mom earns two free race passes. Adult admission is $18.

The East Coast USAC Sprint Cars will be part of a tripleheader show on Saturday, May 15th that will also feature the T.P.Trailers Modifieds and T.P.Truck Equipment Sportsman. Adult admission will be $25 while youngsters 11 and under pay $5.

Information can be found at www.grandviewspeedway.com, Facebook or telephone 610.754.7688