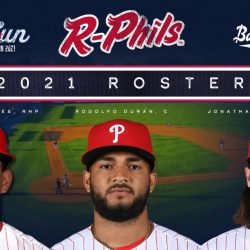 The Reading Fightin Phils, in conjunction with the Philadelphia Phillies, announced their 28-man roster to start the 2021 season on Friday. The roster features four of the Top-30 prospects in the Phillies farm system and one member of the Phillies 40-man roster.

#4 Francisco Morales (RHP), #19 Rodolfo Durán (C), #25 Ethan Lindow (LHP), #30 James McArthur (RHP) are all ranked in Philadelphia’s minor league system. Morales is the lone member of the 40-man, while Mark Appel (RHP) is the only first rounder. Appel was the first pick of the 2013 draft by the Houston Astros.

The Fightins will have three catchers listed on their roster to begin 2021 including 22-year-old Durán, 25-year- old Colby Fitch, and 24-year-old Nick Matera. Durán played 64 games for Clearwater back in 2019 where he boasted a 1.000 fielding percentage. The backstop caught 26 runners stealing and in 529 innings he only allowed ten passed balls.

The position player group features a wide variety of players whose strength and power at the plate and mobility and range on the diamond are sure to lead to much success. The R-Phils only have one listed outfielder on their Opening Day roster. Matt Vierling has spent time at all three spots in the outfield.

Matt Kroon, Luke Miller, and Madison Stokes can stunt as utility players all around the diamond, but have played the majority of their time in the infield. All three of them with the addition of McCarthy Tatum are corner infielders spending many games at first and third base. Gamboa is likely to be the starting shortstop, while fans might also see Dalton Guthrie and Sal Gozzo make appearances there. Guthrie and Daniel Brito are middle infielders who will split time at second base.

The team is headed by Manager Shawn Williams in his second season. He is assisted by Brad Bergesen (Pitching Coach) and Tyler Henson (Hitting Coach) and Nerluis Martinez. The team’s Athletic Trainer is Kris Terrian and the Strength and Conditioning coach is Kenny Matanane.

Please note, an updated roster will be shared on Opening Day.

The Fightins open their 55th season of affiliation with Philadelphia on Tuesday, May 4 at 7:05pm against the Erie SeaWolves (Detroit Tigers). For tickets and the latest information on promotions visit rphils.com/tickets, call 610-370-BALL or visit the Weidenhammer ticket office from 9:00 a.m. to 4:00 p.m.

America’s Classic Ballpark is proud to be a part of Pennsylvania’s Americana Region and was voted the #1 stadium in all of Double-A by MiLB’s Ben Hill. Follow the R-Phils at rphils.com, on Twitter and TikTok at @ReadingFightins, on Instagram @fightins, and like them on Facebook via www.facebook.com/fightins for all information.