ANNVILLE, Pa. – A trio of student-athletes from the Albright women’s lacrosse team earned All-MAC Commonwealth honors, announced by the conference on May 7. 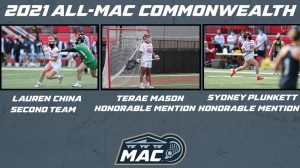 China receives her first MAC Commonwealth All-Conference honors after a standout junior campaign. On the season, she compiled 36 goals and eight assists for 44 points, 18 ground balls, 10 caused turnovers, and 17 draw controls. The Stewartstown, Pa. native ranked fourth in the conference in goals per game with 2.57, third in shots per game with 6.14, and eighth in points per game with 3.14. She matched her career-high six points on five goals and one assist in the Lions’ win over Alvernia on April 7th. China reached the 100-career points milestone against FDU-Florham on April 24th.

Plunkett also earns her first All-Conference honors as a defender. The Yardley, Pa. native set the tone for the Lions’ defense and helped lead the team to third-most caused turnovers in the conference with 127 on the season. Albright also ranked fifth in the conference in goals allowed. Plunkett appeared and started in all 14 games for the Lions this season and tallied 22 ground balls and 11 caused turnovers. She contributed a season-high three caused turnovers and a career-high six ground balls in a tightly contested 8-7 win over Hood on April 10th.

Mason caps off her collegiate career with her third All-Conference honors. The Darby Township, Pa. native has appeared and started in every game for the Lions since she joined the team in 2018. She highlighted her senior campaign ranking fifth in the conference for save percentage with .466 and seventh in goals against average with 11.32. Mason paced the conference in saves per game with 9.86 and led the team in ground balls with 26 on the season. She rounds out her career holding all but two goalkeeper program records.

The Lions finished the 2021 season 7-7 overall and 4-4 in conference play and advanced to the quarterfinals of the MAC Commonwealth Tournament.