Just 0.18% of more than 10 million doses given to hospitals, pharmacies, and other providers through May 21 were discarded. 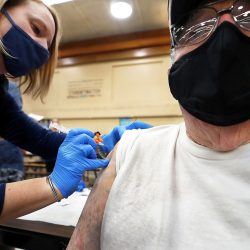 HARRISBURG — After refusing to release details about wasted coronavirus vaccine, citing a decades-old disease prevention law, the Wolf administration has reversed course and made public how many doses have been discarded by providers and why.

The data shows just 0.18% of more than 10 million doses given to hospitals, pharmacies, and other providers through May 21 were not used.

Of the 18,644 discarded doses, providers reported spoilage as the cause in more than 37% of cases. Spoiled vaccines typically include those that have expired or those that were not stored at the correct temperature due to conditions like equipment failure, state health officials said.

The new data claims a state prison in Schuylkill County spoiled the most doses — 2,695 — out of the 624 providers listed. But when contacted by Spotlight PA, a spokesperson for the Department of Corrections said there had not been any spoilage at the facility, SCI-Mahanoy.

The information was submitted prematurely and the corrections department is working to amend the health department’s report, said the spokesperson, Maria Bivens.

The confusion stems from an April 5 issue with a backup generator, causing a refrigerator storing vaccines to lose power for several hours, Bivens said. A report was submitted to the health department; however, Johnson & Johnson, the vaccine manufacturer, reviewed the incident and determined that the vaccines were viable.

Owner Sandip Patel said he had been asking the state for doses since February when demand was high and many of the pharmacy’s customers were eager to get the vaccine.

But the pharmacy didn’t receive its first shipment of vaccines until May 2, he said.

Since then, the pharmacy has administered what it could — about 200 doses — but hasn’t had enough demand to administer the more than 1,100 Pfizer doses it received, Patel said.

The pharmacy wasn’t penalized for spoiling the vaccines, but Patel said he has stopped ordering them. Sending it in smaller quantities might make it more manageable for sites experiencing decreased demand, he said.

“Most of the people already had either received the vaccine or didn’t need it anymore, or they refused it,” he said.

The release of the data comes two months after the state Department of Health initially denied Spotlight PA’s public records request for the information, citing a 1955 law the Wolf administration has used throughout the pandemic to obscure the finer details of its response.

The Disease Prevention and Control Law gives the state wide authority to keep information related to contagious diseases, including details that could identify individuals, confidential. But it has been used more broadly over the past year to withhold all kinds of information.

Like the wasted vaccines, state health officials initially cited the law in refusing to release the number of COVID-19 tests the state was conducting and the number of cases in specific nursing homes. After criticism, the Wolf administration reversed course in both instances.

The rest were wasted because of a broken vial or syringe (686 doses), a vaccine was drawn but not administered (263), or doses were lost or unaccounted for (13). Wasted doses differ from spoiled ones because they come from an open vial.

Among the providers that have wasted or spoiled the most doses: the Allegheny County Health Department. It spoiled 636 Pfizer doses allocated to county vaccination sites over three separate days — April 21, April 24, and May 9 — after officials started to thaw vaccines but then experienced a “sudden and unexpected drop in filled appointments,” said Chris Togneri, department spokesman.

That drop coincided with expanding vaccine eligibility to all Pennsylvania residents 16 and older.

“Over a three-week period, our vaccination appointments went from 100% full to 50% full to 25% full,” Togneri said.

Another 309 vaccines were wasted after vials were opened but doses were not administered or after various issues like faulty syringes, contaminated needles, or other human error, Togneri said.

Since the start of the vaccine rollout, the Allegheny County Health Department has held about 400 vaccine events and administered more than 129,000 doses, Togneri said.

Central Outreach Wellness Center in Allegheny County, Grove City Medical Center in Mercer County, and ACMH Hospital in Armstrong County — all located in the southwestern part of the state — also reported a high number of wasted or spoiled doses. None responded to a request for comment about why those doses went unused by Monday afternoon.