A new wave of problems blocked numerous people from filing for benefits they had already been approved for. 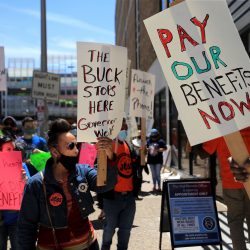 A long-delayed upgrade of Pennsylvania’s computer system for unemployment benefits made a glitch-filled debut Tuesday, frustrating some jobless workers and confirming the concerns of critics who feared the new system would buckle under the heavy, pandemic-fueled demand.

Within the first 12 hours of the launch, more than 62,000 Pennsylvanians had filed claims and the Department of Labor & Industry deemed the new system a success.

At the same time, jobless advocates and scores of unemployed Pennsylvanians expressed an outpouring of frustration as a new wave of problems blocked numerous people from filing for benefits they had already been approved for.

Some people who were receiving benefits through the old system last week were told they were ineligible. Others were refused benefits because they were incorrectly identified as incarcerated. Still others had payments stopped because of overpayments that had long ago been resolved. Some notices of eligibility were bafflingly dated in the future. And a new password requirement, a problem advocates had foreseen weeks ago and raised with state officials, blocked many people from entering the system at all.

“I was so afraid for this to happen today,” said Donna Pfitzenmeyer Swangler, who moderates a Pennsylvania Unemployment Support Group on Facebook with more than 12,000 members. Roughly six dozen people had messaged her for help as of 2 p.m. while she simultaneously tried to answer questions posted on online message boards.

“They absolutely shouldn’t have done this right now with the amount of people that are claiming still,” she said. “There is just more potential for issues and different things to arise. They should have just waited.”

The computer system overhaul was more than 15 years and $200 million in the making. It has been lauded by the state as a necessary fix to the decades-old mainframe infrastructure, which officials have characterized as slow, unintuitive, and ostensibly held together with tape.

The state’s modernization efforts, however, have been marked by failure, delays, waste, and litigation.

Advocates had asked the state to delay the launch until fewer people impacted by the pandemic were relying on it. Technology experts said the hardware’s durability had been mischaracterized by the state, and the nature of the overhaul — a “flip the switch” approach — was poised for failure.

April jobless numbers show as many as one million Pennsylvanians may still be relying on federal and state benefits. The new computer system, which only processes state unemployment benefits, was built by the same contractor, Geographic Solutions Inc., or GSI, that manages the technology for paying out federal pandemic benefits. Its technology has a poor track record in Pennsylvania and in other states.

GSI did not respond to questions Tuesday, but a spokesperson, Michelle Griffith, previously praised the company’s work in other states and readiness to launch the new system in Pennsylvania.

In January, following a new federal funding package, it took the state and GSI weeks to set up new rules associated with federal benefits. And, as a result, numerous eligible people’s claims stalled for months, many incorrectly flagged for fraud or missing information. More than 300,000 people are in a backlog waiting for their state and federal claims to be reviewed and paid out or denied.

“This is like the January PUA [federal Pandemic Unemployment Assistance] launch,” Pfitzenmeyer Swangler said. “That was really bad too and I was nonstop for a week answering messages.”

Pfitzenmeyer Swangler said the new problems will only add to the backlog.

Making matters worse, the department’s phone lines temporarily crashed Tuesday morning. The phone outage was unrelated to the new unemployment system and affected several state agencies, according to the department. Phones were back online by around 11 a.m.

But in the interim, people became frantic, locked out of both the online system and the phone lines. State officials said people were placed in an online waiting room, which is triggered by a large number of people using the system, though the exact number is unknown.

Acting Labor Secretary Jennifer Berrier could not say exactly how many people must be using the system for the waiting room function to launch. She admitted the servers were running slowly because an estimated ten times as many people were logging on alongside the system launch. The state had taken the old mainframe system offline on May 31, preventing new claims from being filed, and temporarily blacking out workers’ access to recurring filing for several days before the launch.

Julia Simon-Mishel, who leads the unemployment compensation unit at Philadelphia Legal Assistance, said workers had trouble loading the system’s webpages because of heavy traffic. She’s also concerned that some people’s data may have been incorrectly carried over from the old system.

“For me the key takeaway is, do people get paid?” she said. “If people don’t get paid, then I think that’s something we have to really look at.”

Simon-Mishel said those who can afford to wait should give the state a few days to fix glitches and log in then. She noted that workers can file claims by telephone again starting Thursday if they are still having trouble.

A small percentage of users also had problems logging in or changing their payment type. A fix for that “server connectivity” issue is underway, according to the department. Several workers on Facebook reported other problems, such as jobless claims that were wrongly identified as inactive.

“Whoever is in charge of this circus should be fired and have to sign up for unemployment,” one person wrote on Facebook. “This s— could not be anymore confusing.”

Nadia Warrick, a former facilities director from Feasterville, said she couldn’t log into the new system Tuesday to file for this week’s benefits. Her computer screen went blank when she tried to confirm she wasn’t a robot. When she tried again later, she was told the new username and password she had just created were incorrect.

“Anytime a new system is rolled out, you’re going to get hiccups,” Warrick said. “But at the same time, I would think that, being so far along into this pandemic, they would have been building this new platform in the background and tested it and made it sure-proof for all of us people out here in Pennsylvania, who really rely on these funds.”

Others had a smoother experience. Gennifer Spangler, a former warehouse manager for an online craft supply store, said logging in and filing a claim was “super easy.” She said the new system was more user-friendly, with a dashboard that made it easy to find and update information.

Still, technology experts warn that even indications of a smooth launch may obscure deeper problems that have to be resolved down the line.

“One of the dangers of switching in one weekend is it looks at first like everything worked,” said Waldo Jaquith, a government technology expert who works at Georgetown University’s Beeck Center for Social Impact and Innovation. “It didn’t.”

“If I can find someone who can bet against me I will,” he said. “But I never do.”