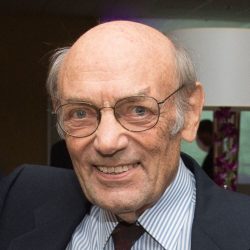 On May 7, 2021, Rolf D. Schmidt was awarded the prestigious President’s Award during RACC’s Forty-Ninth Annual Commencement ceremonies at Santander Arena. Mr. Schmidt grew up northwest of Berlin as the oldest of eight children. After World War II his family settled in the metalworking center of Solingen near Cologne. There, he absorbed technical and academic knowledge in tool and die making, engineering, and received a Technical Masters letter, a coveted foreman’s diploma of that trade.

Rolf immigrated to the United States in 1957 with his wife Renate and their daughter, and $2.40 worth of Deutschmark in his pocket. Within a few weeks, Rolf learned to drive, bought an old car, got a job, and began a new career. Shortly afterward, the rest of Rolf’s family followed them to America to establish their new lives and careers.

In 1970, with his brother Bill, he co-founded Sharpoint, Inc., the Reading based developer and maker of precision surgical needles, sutures and scalpels, until the sale in 1985 of its core ophthalmic division to Nestle’s Alcon Laboratories, the major marketer of Sharpoint’s products. Shortly thereafter, the remaining assets of Sharpoint, Inc. were sold in a local management buy-out to what became Surgical Specialties, Inc.

Rolf is a co-founder and Chairman of the Board of Innocoll, Inc., a developer of unique drug delivery systems. He also serves on the Board of Unique Technologies, Inc., a local manufacturer of precision surgical blades and cutting instruments. Most recently, he has served on the Board of publicly owned Closure Medical Corp., a Raleigh, NC based developer and manufacturer of specialized medical adhesives, a company he co-founded in 1990 and led as Chairman for several years and as Chairman of the Executive Committee until its acquisition in 2005 by its chief marketer, Ethicon, Inc., a division of Johnson & Johnson. Rolf continues to invest in entrepreneurial health care related start up companies.

Rolf Schmidt’s passion for the Reading Area Community College has its origin in his own educational background but he first became involved with RACC in 1990 when he was appointed by the Berks County Board of Commissioners to a taskforce to study the feasibility of a broader college sponsorship. He co-chaired that taskforce and recommended to the Commissioners that the county of Berks sponsor RACC, and they accepted this recommendation. This was the stimulus the college needed at that time to become a respected focal point for local quality education. Rolf’s passion for educational excellence culminated in the establishment of the Schmidt Training and Technology Center. In November 2003, he led the $2.5 million fundraising drive to build facility on the RACC campus; contributing another $1 million himself toward the $10 million project. The center was named in his honor and opened in the spring of 2006.

Rolf continues to serve as a vocal member of the Board, and is one of the most engaged figures in the history of the college.