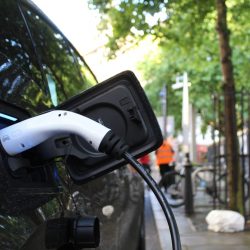 A new report predicts big benefits for Pennsylvania, and millions of jobs nationwide, if Congress decides to invest in upgrading the nation’s electric infrastructure.

The analysis is based on a $274 billion investment in electrification technologies, part of the Biden administration’s American Jobs Plan. The infrastructure package would fund modernizing public transportation and airports, and incentivize construction of electric vehicle-charging stations.

Ryan Gallentine – policy director for electrifying transportation with Advanced Energy Economy, which released the report – said the plan would spur private investment that could help jumpstart a transition to electric vehicles.

“What we found through this report is that investments in electrified transportation programs yield a fivefold return for the economy,” said Gallentine.

The report concludes this level of support would save businesses, consumers and government agencies that switch to electric vehicles $19 billion annually in fuel costs and maintenance. And it would mean a significant increase in jobs in Pennsylvania’s sector, which now employs about 7,000 people.

Rob Altenburg – senior director for energy and climate at PennFuture, a statewide environmental nonprofit – said electrification is a chance for people in PA who are struggling to find work as more coal plants retire.

“There’s plenty of areas in Pennsylvania where we have skilled industrial workers that are going to be looking for jobs,” said Altenburg. “So, opportunities like this to invest and make sure our workforce is ready is also very important.”

Transportation is one of the main sources of pollution in the Commonwealth.

“I think it’s also important that we consider the need to electrify the medium and heavy-duty vehicle space,” said Harris. “To help to not only ensure that the vehicles that are driving through those poor communities are electrified, but also to ensure that all Pennsylvanians and all Americans have access to clean, zero-emission vehicles.”

This week, PA Democratic lawmakers introduced legislation to distribute proceeds from the Regional Greenhouse Gas Initiative to communities most affected by climate change. The same day, Republicans passed a bill to limit Gov. Tom Wolf’s power to impose a price on greenhouse-gas emissions from power plants.