by the Rodale Institute 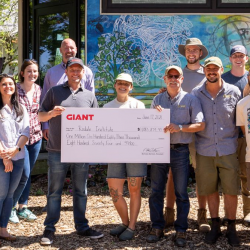 Rodale Institute, the global leader of regenerative organic agriculture, announced that it has received a $1.2 million donation from The GIANT Company. The funds were raised through The GIANT Company’s Healing Our Planet campaign, which ran from March to May, and allowed customers to round up their checkout purchases to the nearest dollar at GIANT, MARTIN’S and GIANT Heirloom Market stores.

This donation will go towards supporting the Rodale Institute Farmer Training Program, as well as farmer consulting services and research projects. This partnership is a unique coming together of two organizations with deep roots in Pennsylvania, both working together to not only grow healthy organic food, but bring it to consumers.

“At The GIANT Company, we’re working hard every day to heal our planet, but we know that to make the greatest impact, it will take everyone working together. Our customers clearly share our passion for sustainability and we’re incredibly grateful for the more than $1 million they donated to Rodale Institute during our recent fundraising campaign,” said Nicholas Bertram, president, The GIANT Company. “Rodale is leading the way when it comes to regenerative organic agriculture practices and we’re excited to be on this journey with them as we work to create a more sustainable food chain from farm to table through education, research and training.” 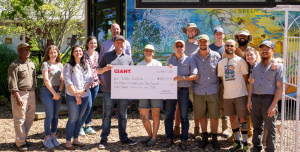 Rodale Institute farmer interns, beneficiaries of the GIANT donation, pose with representatives from The GIANT Company to celebrate $1.2 million raised by the Healing Our Planet campaign

This event was followed by an organic relay race between Rodale Institute CEO Jeff Moyer and The GIANT Company Nicholas Bertram, alongside Rodale Institute Farmer Training program interns, who are beneficiaries of the GIANT donation. Team members competed to pick, process, and pack a farm share box, a process that many beginning farmers in Rodale Institute’s training programs undertake as part of their education.

“Food is about as basic as it gets, so this is a happy day—farmers are back in the field, and we need more farmers in Pennsylvania,” said Pennsylvania Deputy Secretary of Agriculture Cheryl Cook. “Kudos to GIANT for having this campaign and building the support of their customers to contribute to it. I think all of us have felt a need to reconnect to food over the past year, and that shows in the support that your customers have given to Rodale Institute.”

Rodale Institute has been conducting research into regenerative organic agriculture, as well as farmer training and education opportunities, since 1947, and currently operates 8 campuses in 4 states. The GIANT Company’s donation will directly support three key initiatives of Rodale Institute centered around farm consulting, farmer training, and research.