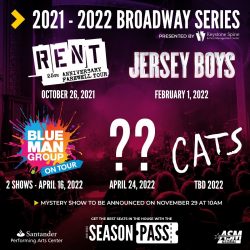 The 2021 – 2022 Broadway Series presented by Keystone Spine and Pain Management Center is officially announced and updated following numerous show postponements due to the pandemic.

Rent and Jersey Boys return to Reading, PA following their sold out performances on the 2017 – 2018 Broadway Series. Rent is entering the final year of touring off broadway and the Santander Performing Arts Center is slated to be one of the last performances of the production in Pennsylvania.

Also returning to Reading is Blue Man Group with a brand new tour, show and production. Blue Man Group will do 2 shows at the Santander Performing Arts Center with performances at 2PM and 7:30PM.

Cats is confirmed for the 2021 – 2022 Season as was previously announced but a new date is not locked yet. A fifth ‘mystery show’ will also be announced on November 29. This yet to be announced title has never played Reading, PA before.

Tickets for Rent are on-sale now online at Ticketmaster.com.

Tickets for Jersey Boys, Blue Man Group, and Cats are for sale exclusively to Season Pass Holders until August 2.

Season Pass holders get exclusive FIRST access to purchase the best seats in the house for our  Broadway Series. With Season Pass you are the creator of your subscription – pick and choose the shows you want to see all season long. If you hate ordering tickets blindly online, this membership is for you! Season Pass holders will receive personalized customer service to ensure their seating preferences and needs are met for each and every show.