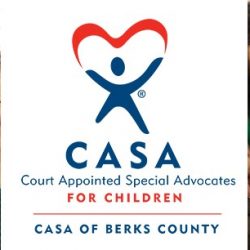 Champions for Children is a program sponsored by CASA of Berks County to seek out and award efforts in Berks County to “change a child’s story”.  Awards are made in four categories:  Individual, Organization,  Teen, and Animal.   From January-March we accept nominations from the community of people, teens, and animals who have improved the lives of children in the past year.  A panel of community members review the nominations and select the winner of each category.  A generous group of sponors donate funds to support this program as well as CASA’s ongoing advocacy for abused and neglected children. 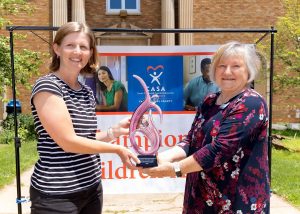 “Crystal Rauenzahn is a tireless child ambassador deserving of the CASA award.” Writes Dr. Joanne Cohen of Kutztown University.  A former profession, said Crystal, “I graduated in 2009.  I am flattered that she followed my career.”  Crystal has been with Glenside Elementary for five years.  Crystal sees her job as the entire community, her job does not stop at the school doors.  Why is she so enthusiastic about her work and community initiatives?  She explains: “There is something about helping others and you see the effect and then you want to do more with bigger ideas.”  Crystal is pictured here receiving her Champions for Children Award from Nancy McCullar, Executive Director of CASA Berks. 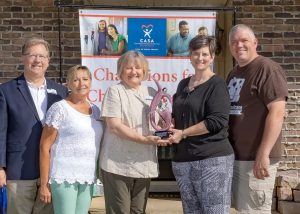 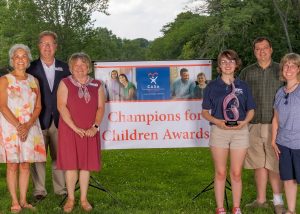 Meghan Cramer, Assistant Director of the Chorus for Causes, led her peers to raise $400 for the United Way’s COVID Response Fund.  In recognition of her leadership and initiative she is awarded the Champions for Children Youth Award.  “I’m really excited and honored to be able to promote more awareness of what Berks Youth Chorus is doing in the community and what we are doing to help other non-profits.” Meghan is pictured here receiving her award. From left to right: Annarose Ingarra Milch, member of judges panel, David Green, CASA Berks Executive Director, Meghan Cramer, Michael Cramer, Michele Cramer. 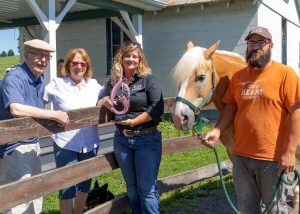 L-R: Bill and Irene, Noble and Meagan and Grant Good.

“We are so thrilled that our very own Noble won an award for being an outstanding animal influence on children in our community.” Said Meagan Good, of Take Heart Counseling & Equine Assisted Therapy.  She explains, “Noble teaches children to cope with hard emotions.  He comforts clients with a nuzzle and his own deep breaths which encourage them to breathe deeply.”  Noble was donated to Take Heart in 2015 by Bill and Irene Briner.  Pictured here are donors, Bill and Irene, Noble and Meagan and Grant Good.