Learn About Electric Vehicles at A “Current” Event

by Boyertown Museum of Historic Vehicles 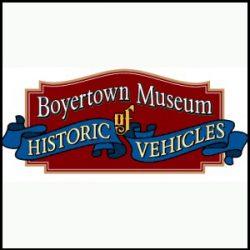 The Boyertown Museum will host its first-ever electric vehicle show on Sunday, July 18 from 10am-2pm. A “Current” EVent will feature examples of electric vehicles throughout several eras on display in the Boyertown Museum parking lot. Two vehicles from the Museum’s own collection will be featured: a 1919 Milburn Light Electric Opera Coupe, which just recently returned from being on exhibit at the Amelia Island Concours d’Elegance, and a 1981 Volkswagen Rabbit. The Rabbit, built at Pennsylvania’s Westmoreland Volkswagen factory, was converted to electric by South Coast Technology of California (SCT). SCT contracted with the Battronic Division of Boyertown Auto Body Works to perform the electric conversion on over 100 Rabbits. The Boyertown Museum is housed in one of the former Boyertown Auto Body Works factory buildings.

Also on display for A “Current” EVent will be a 1933 Thorne B2 Gas-Electric hybrid delivery truck, generously on loan from Jay Crist. This particular Thorne utilizes a Continental 16 horsepower gasoline engine to generate electricity to run a motor that powers the drive train. The Museum is honored to be able to have this early examply of hybrid vehicle technology to share with visitors on July 18.

There will also be modern-day electric vehicle examples, including several Teslas courtesy of the Delaware Valley Tesla Owners Club and Tesla Owners Club of Pennsylvania. Entropy Racing of Sacramento, PA will also be in attendance with two of their Electric Vehicle Sports Racers (EVSR)—fully electric race cars that have raced at tracks all up and down the East Coast. Entropy Racing will also be bringing their unique (if not electric) car hauler—a 1951 American LaFrance.

Several times throughout the event, special speakers will be discussing topics on electric vehicle history. At 10:30am, Boyertown Museum Board Member and Automotive Historian Sam Fiorani will kick things off with a brief history and future of electric vehicles. At 11:30am, Entropy Racing Chief Engineer Charlie Greenhaus will give a brief overview of the EVSR program and take questions. At 1pm, Sam Fiorani will be back to give a history of the Westmoreland Volkswagen plant, and Robert Dare, Former Manager of Engineering for Battronic, and also Chairman of the Executive Board of the Boyertown Museum, will explain the electric conversions done at Boyertown Auto Body Works.

Food will be available for purchase from CD’s Place Catering and Eatery and Mister Softee. A “Current” EVent is free to attend. The Museum will be open for visitors at regular admission prices. Included with Museum admission that day will be blacksmithing demonstrations in our 1872 Jeremiah Sweinhart Carriage Factory. Also on display in the Museum is our special World War II exhibit, A Rosie Outlook: World War II and the Girls with a Star-Spangled Heart, now on display through September 2021. The Boyertown Museum also has several other electric vehicles on display in the Museum gallery, including a 1912 Commercial Truck Company flatbed used by Curtis Publishing of Philadelphia and a 1919 Detroit Electric, among others.

The Boyertown Museum of Historic Vehicles is a 501c3 nonprofit organization founded in 1965 by Paul and Erminie Hafer. The Museum, located at 85 South Walnut Street in Boyertown, Pennsylvania, preserves and displays examples of Pennsylvania’s road transportation history in the former factory buildings of the Boyertown Auto Body Works. Over ninety locally manufactured cars, trucks, carriages, bicycles, and motorcycles are on display, as well as two examples of roadside architecture–a 1921 cottage style Sunoco gas station and a 1938 Jerry O’Mahony diner. The Museum is open seven days a week, 9:30am-4pm. Admission is $10 for adults, $9 for seniors and AAA members, and ages 15 & under are free. The Museum exterior is currently under construction but remains open—please excuse our appearance! For more information, call 610-367-2090 or visit www.boyertownmuseum.org.