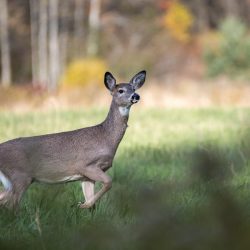 A temporary animal-feeding ban is being proposed for the Allegheny National Forest after a captive deer tested positive for chronic wasting disease (CWD) in nearby Warren County.

The disease, first detected in Pennsylvania in 2012, attacks the brain and causes overall wasting of the affected animal, often deer or elk. The latest CWD case, in May, prompted the state to establish a fifth Disease Management Area (DMA), where feeding is banned for at least five years and deer within and surrounding the area are tested for the disease frequently.

Andrea Korman, chronic wasting disease biologist at the Pennsylvania Game Commission, recommended never feeding wild animals, even if it was not banned.

“We do know it increases transmission of all diseases, not just CWD,” Korman reported. “It changes behavior of deer, it habituates them, it makes them more likely to be struck by a vehicle. They’re also more likely to get parasites and all kinds of other not great consequences, whenever you are feeding them in a non-natural way.”

The U.S. Forest Service will accept public comments on the proposed one-year feeding ban through August 13. The agency expects a decision by the end of the month.

For hunters in the region, it’s recommended any animals be tested for CWD.

Scott Weber, interagency liaison with the Pennsylvania Game Commission and the Wildlife Futures Program at the University of Pennsylvania’s School of Veterinary Medicine, advised if the test is positive, the meat should not be consumed. He added it is important to dispose of the animal properly, in a landfill, to prevent any further spread of the disease.

“When you see a clinical case identified, it’s really just the tip of the iceberg,” Weber explained. “Because that clinical case at the top of the iceberg is really, essentially, hiding that below it are all these other infections that are going on, that are being undetected until they show these clinical signs.”

The Game Commission has a CWD hotline where the public can ask questions and report sightings of deer or elk that appear to be sick: 833-463-6293.