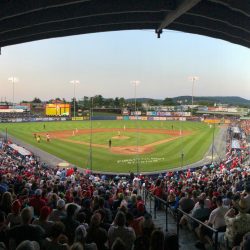 The Reading Fightin Phils, in conjunction with Major League Baseball, are so excited to announce their home schedule for FirstEnergy Stadium during the 2022 season! Game times, road trips, and a full R-Phils promotional schedule consisting of giveaways, appearances, and more will be announced at a later date.

The R-Phils will be playing 69 home games at America’s Classic Ballpark. The 2022 schedule consists of eleven six-game homestands, plus one three-game homestand to open the season. Mondays are the universal off-day in the schedule once again.

START: Reading begins the season at home on Friday, April 8 – Sunday, April 10 with one three game series against the Somerset Patriots (Yankees).

HOLIDAYS: The Fightins are home for Memorial Day weekend, playing Sunday, May 29th agains the Binghamton Rumble Ponies (Mets). Fans can celebrate Father’s Day at the ballpark this summer when the team plays the Portland Sea Dogs (Red Sox) on Sunday, June 19th. The team spends Sunday, July 3rd against the Somerset Patriots (Yankees) at America’s Classic Ballpark to celebrate the Fourth of July holiday!

END: The Fightins will end the regular season at America’s Classic Ballpark when they host the New Hampshire Fisher Cats (Blue Jays) from Tuesday, September 6 through Sunday, September 11.

So that you can begin to plan your outings at FirstEnergy Stadium, the twelve R-Phils home series are scheduled as follows:

The 2022 promotional schedule and “On Sale” date for individual game tickets will be announced at a later time. Pleasecall 610-370-BALL for all ticket related inquiries or visit rphils.com.