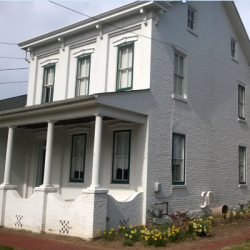 When the non-profit John Updike Society bought the house at 117 Philadelphia Ave. in August 2012 with the intention of turning it into a museum, they knew what they were getting into. Society president James Plath lived in a 1906 house that he rehabbed and cautioned fellow board members that it takes longer than you think. He was right. Nine years later, the house-museum will finally host its grand opening on Saturday, Oct. 2, 2021. And the people of Shillington—Updike’s favorite place in the world—are invited.

The grand opening will follow a 1 p.m. Pennsylvania Historical & Museum Commission Historical Marker Dedication, to which the public is invited. That event is free, though seating will be limited. The ceremony will take place outdoors at the house at 117 Philadelphia Ave. in Shillington, with reserved seating for honored guests and members of The John Updike Society, who have gathered in Shillington and Reading for their 6th biennial conference. The society has members in 17 countries and 35 U.S. states. All four of Updike’s children will attend the dedication.

In addition to the unveiling of the Pennsylvania Historic Marker, a National Registry of Historic Places plaque will also be revealed. After that, between 1:30 and 3 p.m., those in attendance will be among the first to tour the house, and for free. After that, the museum will charge $5 for visitors age 16 and older.

The Updike home, which was originally occupied by Howard Shilling, son of Shillington namesake Samuel Shilling, was restored by R.J. Doerr, who had previously restored the home of one of the signers of the Declaration of Independence. Doerr based his restoration on Updike’s writings, the house’s architectural “footprints,” Updike interviews, correspondences with Updike friends and family, and comparisons with local period houses. The result is a striking recreation of the way the house would have looked during the years that young John Updike lived there—1932 to 1945, after which the family moved to Plowville.

“I think people are really going to be surprised by how many wonderful items the society has assembled to create 10 rooms full of exhibits that tell the story of Updike and his relationship with Berks County,” said John Updike Childhood Home director Sue Guay, a professor of communications at Alvernia University. Alvernia hosted the Updike Society’s first, third, and now sixth conference.

Updike was one of the great American writers of the 20th century. The Guardian (U.K.) wrote of Updike’s main character in Rabbit, Run and sequels about an aging former basketball star, “Harry ‘Rabbit’ Angstrom, Updike’s loveably mediocre alter ego, is one of America’s great literary protagonists, up there with Huck Finn and Jay Gatsby.”

Purchase of the house and the restoration were made possible by a generous donation from The Robert and Adele Schiff Foundation, as well as support from the PECO Foundation, Wabash College, Habitat for Humanity of Berks County, The John and Gaye Patton Charitable Foundation, American Family Insurance Dreams Foundation, and partnerships with the Shillington/Mifflin Alumni Association, Governor Mifflin School District, Alvernia University, and numerous private donors of exhibit materials.

“We’ve had a wonderful outpouring of support,” Guay said. “This museum may be owned and operated by The John Updike Society, but it really belongs to the people of Berks County.”