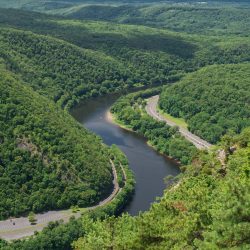 The National Association of State Foresters was formed in 1920, with its first meeting in Harrisburg amid an increase in large wildfires throughout the country. One hundred and one years later, it met back in Pennsylvania to learn best practices to help fight forest-health issues similar to what they saw a century ago.

Because of the pandemic, last year’s conference went virtual. State foresters just wrapped up their 2021 in-person meeting in Pittsburgh with the last 100 years on their mind.

In the late 1800s and early 1900s, the state battled many wildfires, reducing the extent of once common tree species. State forester Ellen Shultzabarger said the lessons of the past can help inform the future of how we maintain forests.

“So we were talking about forest health 100 years ago,” said Shultzabarger. “Forests and these pests and these issues don’t just stay within boundaries, and it’s extremely important for us to work with our neighboring states and with our partners to really be effective in having good forest management moving forward.”

Martin said foresters in the Northeast learned from those in the South about their Urban Forestry Strike Teams, which deploy arborists to evaluate trees hit by storms to help FEMA make decisions on whether damaged trees need to be removed or will recover on their own.

“That’s a huge benefit financially to FEMA,” said Martin. “Because when you take a tree down, it’s far more expensive than if you have to take a couple limbs off and to make it safe and let the tree respond healthily. That’s been something that’s been working in southern states for several years, one of my takeaways that I wanna see happen in the Northeast.”

Among the policy decisions made at the conference include the approval of genetically modified organisms, or GMOs, to protect forests from threatening invasive species.