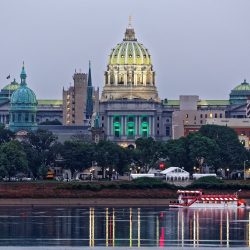 Harrisburg Pennsylvania skyline with State Capital Building and a river boat in the foreground. Tents are set up in the park for Memorial Day festivities. The view is from across the Susquehanna River.
You May Also Like
Facebook Twitter Pinterest Email
Share

The council is made up of six academics and political experts from throughout the state, each with knowledge of redistricting. They will provide recommendations to the governor when he reviews the new congressional-district maps approved by the state Legislature later this year.

Khalif Ali, executive director of Common Cause Pennsylvania, said he hopes the new council ensures the people of the Commonwealth come first.

“Drawing maps is a process that requires some expertise,” said Ali. “I don’t think that the science and logic of drawing maps should supersede the desires and wishes of the citizens of Pennsylvania, as long as they’re within reason.”

The governor’s office also announced a new website where Pennsylvanians can offer feedback on the congressional redistricting process, submit their own proposed maps, and outline communities of interest.

PA’s population grew by only 2.4% in the last decade, and so the state will lose a U.S. House seat.

Pennsylvania’s Legislative Reapportionment Commission, which helps create the state House and Senate district maps, is having an additional public comment hearing tomorrow in Harrisburg, that will be livestreamed.

Maria Gutierrez, director of membership of the Latino grassroots organization CASA, said these hearings give people a chance to share why they think it’s important to keep communities together.

“Our communities want to express that they want not to be divided,” said Gutierrez. “They want to be count[ed] as part of a great community, and not to be divided in sections so their political power be diminished.”

The House State Government Committee has also rescheduled its three redistricting hearings, to be held in October instead of this month, to accommodate state lawmakers’ early return to the Capitol.

Residents who want to provide in-person testimony at those hearings can sign up online, at ‘paredistricting.com‘ by October 13.