The Understory: Befriend a Bat 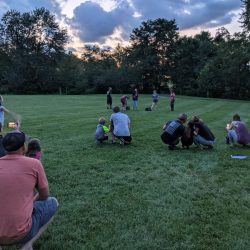 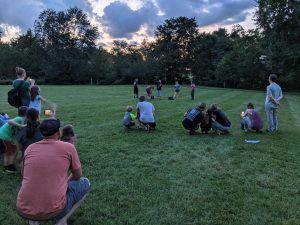 A small group at The Nature Place eagerly awaits the release of five big brown bats recently rehabilitated by the PA Bat Rescue.

Late in August, standing in an open field and backlit by the muted glow of the sun’s farewell, Debra Boyer lifts her arm straight above her head. There aloft within the nestled folds of a hand towel and cupped gently in her gloved grip, a juvenile big brown bat stirs.

The pup had been found abandoned on the ground about 5 weeks earlier, too gaunt and weak to climb back up into their roost. Malnourishment sets in quickly for baby bats like this; based on the pup’s sunken demeanor when rescuers discovered them, they had already endured at least 24 hours of separation from their mother.

It was in this dire moment of atrophy that the pup was whisked away to the Pennsylvania Bat Rescue for rehabilitation.

The Pennsylvania Bat Rescue is a small non-profit, operating out of president and founder Steph Stronsick’s home. Each summer, from June into August, Stronsick’s garage-turned-bat-nursery is inundated with orphaned bat pups.

It’s non-stop work for the surrogate bat mother, as the pups require feeding every 2-3 hours. But once the pups reach flying age – at around 8-10 weeks – Stronsick’s labor of love comes to a rewarding conclusion with her bat babies’ release.

Perched at the closure of their own rehabilitation journey, the juvenile big brown bat pauses, breathing in the fresh twilight. Collected at a distance, a small crowd of onlookers waits on bated breath. Then, compelled by the beckoning dusk, the young bat takes flight for the first time in the open sky.

They fly low at first, just over the crowd of awe-struck “Oohs!” and “Ahhs!” before fluttering towards the shadowed tree line, out of sight.

They were one of five juvenile bats released at The Nature Place in late August. Thanks to the care furnished by the Pennsylvania Bat Rescue, they all have survived one of the many hazards facing Pennsylvania’s native bats.

Bats are a group of mammals that belong to the order Chiroptera, from the Greek cheir meaning “hand” and pteron meaning “wing”. Fittingly, bats are the only mammal on Earth capable of true flight using skin-webbed wings built from elongated arm and hand bones; quite literally, bats fly by flapping their hands!

Unfortunately, these unique denizens of the night sky have long been misunderstood, and even vilified, by people. People have feared and persecuted bats for being dirty, rabies-carrying, blood-sucking, “rats with wings”. But this harsh critique is riddled with errors, burdening bats with a slanderous reputation. 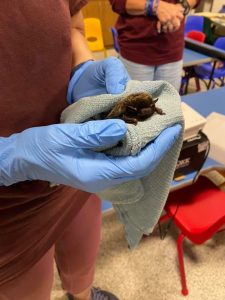 A volunteer from the PA Bat Rescue cradles a big brown bat that she helped to rehabilitate before its release at The Nature Place.

There are 1,400 species of bats, only three of which suck blood (and none of these bats live in the United States). Regardless of their diet – be it blood, bugs, nectar, or fruit – bats take hygiene very seriously and spend significant portions of their day grooming and cleaning themselves.

Also contrary to popular belief, most bats don’t carry rabies; in fact, less than 1% of bats worldwide carry the disease. You have a much higher chance of contracting rabies from a dog or racoon than you would from a bat!

Furthermore, instances of bat disease spilling over into human populations are often spurred by human activities that destroy and encroach upon bat habitat, forcing increased interactions between wild bat populations, livestock, and people. We must acknowledge the repercussions of our own actions when we press contact with wildlife and reconsider our role in preserving a peaceful coexistence.

Bats, like most wild animals, prefer to be left alone and will avoid humans. When left to their own devices, bats are harmless and, more importantly, invaluable threads interwoven through Earth’s web of life.

Under the cover of night (while we lie sleeping under the covers of our beds), bats are busy. Insect-eating bats feast on flying bugs, many of which are agricultural pests. In fact, U.S. farmers save an estimated $23 billion each year thanks to the efforts of insectivorous bats, whose appetites reduce crop damage and limit the need for pesticides.

Nectar-feeding bats are responsible for pollinating a wide variety of plants including those used commercially by people such as balsa wood, cloves, and agave – the plant whose juices are fermented and distilled to create tequila! Salud!

Fruit-eating bats play a critical role in spreading seeds, which is increasingly needed in tropical climates where deforestation threatens to destroy vast expanses of rainforest. Bat droppings, rich in seeds from their fruit-filled diets, help to replenish lost forests. In cleared areas, seeds dropped by bats can account for up to 95% of the first new growth.

Despite the precious role bats play in nature’s ecosystems, bat populations across the globe are struggling. In the United States, more than half of bat species are in severe decline or listed as endangered.

Inciting this fall out is a perfect storm of stressors including climate change, human persecution, the expansion of wind energy, emerging diseases like White-nose Syndrome, and habitat destruction.

Mature forests are increasingly under siege, as people cut down trees for profit or to make space for other land uses, from farming to residential development. But many North American bat species rely on these same forests for hunting and shelter. The federally endangered Indiana bat, for example, sleeps in cavities created by loose-barked trees, like shagbark hickory, during the warmer months of the year.

Land conversion can either destroy or fragment bat habitat, disrupting migratory flyways and habitat corridors that bats use to access new areas in search of food, shelter, or warmer climes.

Bats also use caves and repurpose abandoned mines as daytime roosting habitat or as hibernacula – over-winter shelter where colonies of bats tuck in together when temperatures are dangerously frigid and insect prey are limited. Inappropriate tourism, vandalism, and the collapse or backfilling of abandoned mines ruin hibernacula, forcing bats out or even disturbing them mid-winter, with disastrous consequences.

Just as we are the source of the bat’s strife, we too have the power help.

Here in the Commonwealth, the Pennsylvania Bat Rescue’s on-the-ground rehabilitation work is complimented by the habitat protection efforts of state agencies and organizations like Berks Nature.

When the Pennsylvania Game Commission (PGC) sought to understand the summertime behavior of Indiana bats, they outfitted bats with radio transmitters, who then led them to the Oley Hills in Berks County. Here, nestled within a vast expanse of mature forest, herbaceous wet meadows, and sheltered networks of pristine watersheds, the largest maternity colony of Indiana bats in Pennsylvania was discovered.

To support this sensitive population of Indiana bats, the PGC introduced the landowners harboring this colony to Berks Nature. Their goal: to permanently protect this varied patchwork of environments and ensure the landscape endures as suitable habitat for the Indiana bat in perpetuity, regardless of their federal status under the Endangered Species Act. 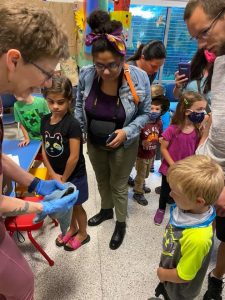 Children and adults alike were eager to get a closer look at these misunderstood mammals.

In these special easements, not only is development limited, but any action that would significantly impair or interfere with land’s ability to support the Indiana bat (or bog turtle) are prohibited.

As danger presses in from all sides, securing a safe future for bats will require more long-term work and investment in conservation. Demonstrations of this commitment can be seen across Pennsylvania already.

In December of 2020, the PGC and Pennsylvania Department of Conservation and Natural Resources began implementation of a Habitat Conservation Plan for both the Indiana bat and the federally threatened northern long-eared bat on 3.8 million acres of publicly held forest; and each year the Pennsylvania Bat Rescue rehabilitates about 250-300 bats.

Now, after generations of misguided distrust and fear, we have the opportunity shift the narrative, joining with bats not as combatants but as allies. Now more than ever, bats need our friendship.

Minimize use of chemical pesticides. Remember that bats eat bugs. When you poison pesky insects, you may accidentally be poisoning bats as well.