Even with another $35 million on the way, the city needs another $276 million to cover the pipeline of existing applications. 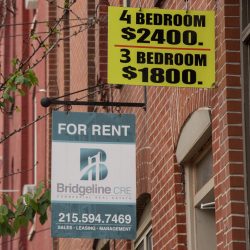 Part of the reason for Philadelphia’s funding crunch is that the state and federal governments distributed much of the money based on county population, not on the number of low-income renters, or the cost of rent.

With thousands of people still waiting for help, Philadelphia’s emergency rental assistance program could run out of money in as little as two weeks, as the city waits to receive more funding from the U.S. Treasury.

Another $35 million in federal relief is on the way, though exactly when it will arrive is unclear. But even that won’t be enough money to help everyone who has applied, said Gregory Heller, who is overseeing the program.

He estimated the city would need another $276 million just to cover the pipeline of existing applications — not counting the roughly 1,500 new ones that are arriving each week. The city had received about 61,600 applications as of last Friday.

Congress has approved more than $46 billion in rent relief to stave off an eviction crisis, but many state and local governments have been slow to pay out the money to landlords and tenants, with applicants stymied by glitchy online forms, a lack of staff, and unnecessary paperwork requirements.

Nationwide, just 30% of the first round of federal rental aid had been spent by the end of August.

Some of Pennsylvania’s 67 counties, which are each running their own assistance programs, have similarly struggled to work through a mountain of applications and get funding out the door.

Philadelphia, meanwhile, has been hailed as a national model, both for the speed with which it has sent the money out and the way the assistance program is integrated with the municipal court system.

But the city’s success — and the level of need — have yet to be matched by sufficient funding, and the current shortfall has already left many tenants unable to receive all the help they qualify for.

In theory, applicants can get up to 18 months of assistance to cover future rent as well as costs already owed. But, in an effort to make limited funding go further, city officials in late August stopped allowing people who had already received money to reapply.

As a result, many tenants who are still struggling to make rental payments can’t get additional help and will fall behind again, Heller said. “If we get hundreds of millions of new dollars, we might change that policy, but at this time, it just doesn’t seem possible,” he said.

Vik Patel, a staff attorney in the housing unit at Community Legal Services of Philadelphia, said that with the prospect of more funds on the way, struggling tenants should continue to apply.

“That way when that money comes in, their application will already be in the queue to receive that money further down the line,” he said.

There are mechanisms on both the state and federal levels to reallocate funds from areas that do not appear to need as much money as they received to places like Philadelphia.

As a “high-performing jurisdiction,” the city will likely be among the first in line to receive more funding through this process — although the amount and timing are still unclear, Heller said.

U.S. Treasury officials recently said the agency will begin looking at where funds have and haven’t been spent starting Oct. 15. The reallocation process will happen over a period of several months and will not be finalized until next spring, according to a recent letter sent to state and local governments.

The Pennsylvania Department of Human Services will run its own reallocation process and has begun surveying counties to determine how much funding will be available for redistribution, a spokesperson said.

With the timing and amount of additional funding still up in the air, Philadelphia may have to press pause on payments completely until more money arrives.

A city spokesperson said Philadelphia does not have any additional federal stimulus funds that could be redirected for rental assistance. The state is sitting on billions in unspent stimulus funding, but Republican lawmakers have insisted it should be saved to use in future budgets.

“It’s an awful prospect, especially when we know the money is available in the state,” said state Sen. Nikil Saval (D., Philadelphia). “It should not happen.”

Part of the reason for Philadelphia’s funding crunch is that the state and federal governments distributed much of the money based on county population, not on the number of low-income renters, or the cost of rent. (The second round of federal funding did include extra money for “high-need” areas, including Philadelphia.)

A population-based formula shortchanges urban counties, which tend to have a higher share of renters and higher costs of living, said Marc Stier, director of the Pennsylvania Budget and Policy Center, a left-leaning think tank in Harrisburg.

For instance, only 14% of households in rural Forest County are renters, compared with 47% in Philadelphia — the highest number in the state. But, in the first round of funding, Forest County received more than five times as much money per rental household, according to the group’s analysis.

The counties that received less assistance per rental household also tend to have a greater share of Black residents, Stier said. “It’s unfair and it’s racist in outcome, if not in intent.”

Greg Wertman, president of Philadelphia’s largest landlord association, commended the city for the strength of its program but has watched in frustration as funds dwindle. Tenants and landlords who did everything they were supposed to do see their peers receive funds while they wait for help they’re not sure will come, he said.

The association represents many of the city’s small landlords, who own a few units and have been struggling to keep up with maintenance, mortgages, and other expenses without all of their rental income. Some landlords have been deferring maintenance or listing their properties for sale, which threatens the city’s supply of affordable housing.

“After 18 months of this, it’s just like they’re numb at this point,” Wertman said. “They’re just numb because of everything they’ve gone through. … You gotta feel both for the landlords and the tenants going through this.”