by Studio B Fine Art Gallery 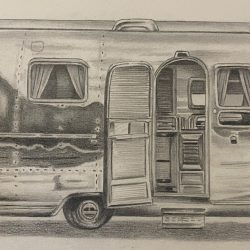 On Sunday, October 24, 2021, from 1-2 p.m., Joe Romeri, former inmate, and Jody Guy, Executive Director & Founders of Wilkinsburg’s Civic Center, will visit Studio B to speak about the prison experience and the role that art plays in the life of a prisoner. Bob Wood will facilitate the discussion.

The prisoner art show/experience, represented by inmate Richard A. Guy, will have as its central point the Pencil Drawing Art Class offered to hundreds of prisoners at the State Correctional Institution at Fayette, Pennsylvania.

“The class objective enabled each prisoner to overcome the restrictive prison environment to see the world in a new perspective and express themselves through visual arts,” said Guy in a prepared statement.

To augment the show and effectively communicate the prison experience to the patrons, a posting of the Department of Corrections documents and supporting references will be exhibited providing a perspective of rules, policies and procedures including permitted art materials, religious activities, and housing unit rules. Artist statements and profiles will provide additional insights.

In his statement, Guy offered several overviews for consideration. First, due to COVID, no art classes were conducted since March of 2020. The facility remains in a lock-down cohort status that was just relaxed several weeks ago. All the drawings predate the lock-down status. All the 3-D art was done in-cell during COVID.

Second, the majority of pencil drawings were done by students who had no prior art instruction or experience. “What these prisoners did and accomplished through hours and hours of daily practice is remarkable!” Guy explained. “Some of the art represented in greeting cards, tattoo patterns, handkerchiefs, and envelopes may look simplistic but represent astounding artistic achievements accomplished while in prison to better themselves.”

Third, most of the drawings were of “traditional” art; landscapes, still life and portraits, Guy noted. “The students did these by design and choice of their own. Most all gravitated towards traditional because it had greater meaning and sense of accomplishment to them. Sending a landscape home to family and friends was much more desired than sending home a still life of a prison cell,” he continued.

The exhibit’s origins began in 2013 with a letter from Richard A. Guy, a man serving a life sentence at the State Correctional Institution in LaBelle, Fayette County. He proposed organizing an exhibit of his fellow prisoners’ artwork as a contribution to the library’s art lending program. In his letter, he mentioned that he had read about the library program and mentioned it to a couple of his fellow inmates–very good artists–with the idea of giving them an avenue of creativity and to assist the library in its project.

The project was to showcase 20 works of art, but word spread and some inmates donated 30 pieces eager to make sure they were included in the show. The library launched the first exhibit of The Prism Project, “Inside Artists Reaching Out.” The 25 pieces on exhibit were available for people to check out; another group of donated items were on display, including hand-made cards, a dollhouse and jewelry boxes made out of folded paper.

Jody Guy, Richard A. Guy’s first cousin, represented him at the opening show and read his speech to the crowd of about 80 people. Guy has spent over 30 years in the state prison system for the stabbing death of a friend after an argument. In a 1995 interview, he said he had been strung out on vodka and valium at the time. Guy had been a highly-ranked teenage tennis player and had served 4 years in the U.S Navy.

He has been active in sports, social activities, and education; he plays keyboard and saxophone in bands and shows; served as captain and played on basketball, softball, and volleyball varsity sports teams and as intramural league commissioner in basketball and volleyball. He has coached and played on over 25 intramural championship teams and received the Department of Corrections Athlete of the Year award. He has been a leader and role model to his peers demonstrating discipline, teamwork and moving his life forward in a positive direction. He is also a P.I.A.A state-licensed basketball official.

He became a communications instructor, administered tests, maintained all files for the University of Pittsburgh, and was the outside Instructor Orientation Coordinator. He graduated from the first Department of Correction National Thresholds Program and taught decision-making skills. As Secretary of the PA Lifer’s Organization, he created workshops and symposiums centered around parole eligibility issues for PA lifers. His charitable work includes chartering the “Shots for Tots,” a Pittsburgh Pirates alumni group event; expanding a Veteran’s Day ceremony; starting a bi-annual Girl Scout cookie sale; and serving as a peer facilitator for the Department of Correction Citizenship course, teaching civic pride and personal responsibility to prisons.

Ms. Guy told the audience, reading from her cousin’s prepared speech, that another inmate had planted the seed for the show by “bemoaning the lack of artistic opportunities that incarceration imposes. I was swamped with artists desiring to contribute.” A young inmate told him that “within all bad lies some good and he wanted the world to know his artwork represented his good.”

Reading Mr. Guy’s speech, Ms. Guy said that the Prism Project “humbly offers this artwork as a small token of restitution to the community and society for the harms that we have caused.”

The exhibition and opening reception are free and open to the public; all COVID safety protocols will be observed during the in-person reception. In addition, the gallery invites visitors on Saturdays and Sundays from 12-2 p.m. or by appointment by contacting Susan Biebuyck, [email protected], 484-332-2757 or Jane Stahl, [email protected], 610-563-7879.