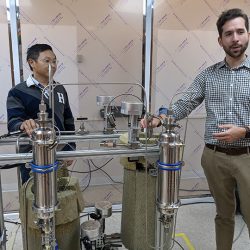 Successful entrepreneurs create products and services that solve problems and challenges. Eric Schraud is one of those entrepreneurs: From initially developing a case to extend the battery life of his tablet, to pivoting and creating a more efficient method to produce green hydrogen, Schraud has a track record of designing solutions.

A native of New York City, Schraud, 34, already had a background in information technology and business consulting when he decided to return to college to pursue a degree in electro-mechanical engineering technology at Penn State Berks.  The Berks LaunchBox staff first met Schraud in July 2020 when he reached out for help with a SolidWorks design he was creating  for a tablet case that would hold extra batteries to extend his device’s power supply.

After 3D printing a few prototype battery cases in the Berks LaunchBox Makerspace, Schraud submitted the idea to the Penn State Idea TestLab, a series of workshops that help entrepreneurs gain a better understanding of their customers’ challenges and identify the unique value their product can provide. Working through the customer discovery process forced Schraud to reevaluate his original idea, and he decided to pivot from the battery case concept to a much larger project he had been working on intermittently since 2010 — a process that makes green fuel using hydrogen or green hydrogen.

Schraud presented the concept in the Penn State Berks Flemming Creativity, Entrepreneurship and Economic Development (CEED) Center’s STEM Business Idea Challenge in the fall of 2020. Faculty were so impressed that they urged him to patent the idea before presenting it to anyone else.

Berks LaunchBox staff continued to mentor Schraud and helped him to connect him with a Penn State Berks engineering student who assisted with research and development, as well as a mechanical engineer who offered his lab and assistance. LaunchBox staff also helped him to connect with Penn State resources for help with researching patents related hydrogen generation and a local attorney to prepare his company’s legal entity and operating agreements.

On March 10, 2021, GenHydro was born. Since that time, the Schraud has added six employees to his staff and rented 7,000-square-feet of space at a business park, where the company will conduct hydrogen testing. After successfully raising seed funds, they built a working prototype, Gen 1, a small reactor system capable of scaled hydrogen production at low temperature and pressure. It produces 600kg of decentralized hydrogen a day, which could power 600 average-sized homes in the United States for 24 hours.

According to Schraud, this system is close to commercialization with expected deployments in fueling stations and other applications needing on-site and on-demand hydrogen production.  He is currently working toward outfitting their first hydrogen refueling station, three hydrogen vehicles, and a hydrogen forklift in 2022.

GenHydro recently completed their Gen 2 larger reactor for centralized energy creation, which they will use to partner with natural gas and large-scale utility companies. The Gen 2 system operates at high temperature and pressure, with high hydrogen output capabilities. Schraud explains that the industrial scale of this system will also produce enough heat and pressure to co-generate utility scale electrical power when the output of the reactor is fed into a steam turbine.

Schraud goes on to explain that natural gas plants can blend hydrogen into their existing pipelines to lower carbon emissions. A number of utility companies have already begun pilot programs for hydrogen blending, and plan to expand to more pipeline locations.

In addition, Gen 1 and Gen 2 reactors are both capable of producing hydrogen at a low cost, hitting the U.S. Department of Energy’s 2030 targets for hydrogen production way ahead of schedule.

What’s next for GenHydro? The company is getting ready to launch a campaign to raise 5 million dollars for the commercialization of the Gen 1 reactor and development of Gen 3.

Looking back on his work, Schraud said, “The Berks LaunchBox has provided solid connections to key engineers and technology-based professionals for founding my business and beginning to execute my dream of a new green renewable source of energy. I truly appreciate their guidance and support!”