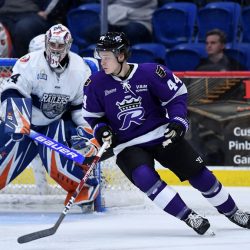 The Reading Royals, ECHL affiliate of the Philadelphia Flyers, have announced that the Flyers assigned forward Matthew Strome and the Lehigh Valley Phantoms assigned defenseman Ryan MacKinnon to the team.

The Mississauga, ON native was drafted by the Flyers in the fourth round of the 2017 NHL Entry Draft while playing with the Hamilton Bulldogs in the OHL. He scored 115 goals and 132 assists (247) points for Hamilton in 260 games with it. He also captained the team in 2018-19 and won the OHL Championship in 2018.

MacKinnon, 27, played two full seasons in the ECHL with the Worcester Railers. Across 124 games, he scored 11 goals and 39 assists (50 points). He was contracted by the Bridgeport Islanders from the end of the 2017-18 season until the Phantoms signed him on Sept. 17, 2021. He only played 17 games with the then Bridgeport Sound Tigers in his over two seasons there, as he frequently was loaned to Worcester.

MacKinnon finished second in defensive scoring for the Railers in 2018-19 with 26 points in 68 games, only 4 points behind Mike Cornell.

Before “going pro,” the Summerside, PE native played both junior hockey in the QMJHL, captaining Rimouski Oceanic and the Charlotte Islanders over two years, and college hockey in USports with the University of Prince Edward Island. He was named the to his college conference’s All-Rookie Team in 2016 and to its First All-Star Team in 2018.