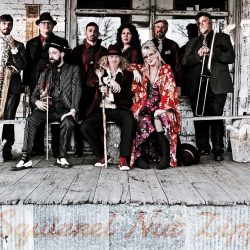 Attention, Zipsters! It’s time to get into the holiday spirit because the Squirrel Nut Zippers (SNZ) are hitting the Miller Center For The Arts in Reading, PA on Friday, December 3 as part of their highly-anticipated Holiday Caravan tour.

Featuring songs from their Christmas Caravan album as well as classic holiday tunes and even a few SNZ hits, the show promises to be one of the biggest holiday concerts of the season.

SNZ released their latest album Lost Songs of Doc Souchon in late 2020. It features 10 brand-new tracks – a combination of newly-penned Zippers songs, along with a few tunes from past times – and has received acclaim from fans and critics alike.

“This new album was inspired by all of the mysterious characters from the history of New Orleans jazz music,” said band leader Jimbo Mathus. “It speaks to the hidden roots of where our aesthetic, interests, and philosophy comes from. It pulls on the hidden thread.”

Prior to Lost Songs of Doc Souchon , their most recent studio album Beasts Of Burgundy was released in 2018 and debuted at #4 on the Billboard Jazz Albums Chart upon its release. It was back in 1998 when SNZ released their first and only Holiday album titled Christmas Caravan, which went on to sell a quarter of a million copies and reached #12 on the Billboard Holiday Albums chart.

SNZ began their musical journey in Chapel Hill, North Carolina, in the mid 1990s, as a musician’s escape from the cookie-cutter world of modern rock radio at the time. Mathus, along with drummer/percussionist Chris Phillips, formed the band as a casual musical foray among friends and family in the area. It wasn’t long before the band’s quirky mix of jazz chords, folk music, and punk rock leanings spread out of the region and attracted a national audience.

Since reactivating in mid-2016, SNZ have been performing to packed houses across the country and around the world. As Mathus has said since the band’s re-launch, “it’s not a reunion, it’s a revival.”