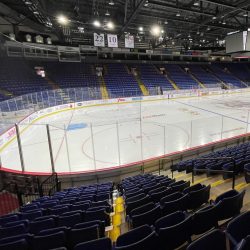 The ASM Global Managed Santander Arena has recently completed an upgrade to it’s in-arena lighting system for events produced by MUSCO and installed locally by Pagoda Electrical. Since 1976, Musco Lighting has specialized in the design and manufacture of sports and transportation/infrastructure lighting solutions around the world. They’ve pioneered systems using metal halide and LED technologies that have made dramatic improvements in energy efficiency and provided affordable ways to control spill light and glare.

The new lighting marks the first of multiple projects under way during the venue’s 20th Anniversary Season. The Arena’s previous lighting system operated at just 18,000 Lumens, where as the new system provides over double the lighting as it operates at 50,000 Lumens. The new LED system are set to operate at a “cooler” temperature on the Kelvin scale giving a truer white for events and have 14 RGBA fixtures which allow the color of the arena to be changed for events and hockey games.

The new system will make it’s public debut this Saturday, December 11 for the Reading Royals Affiliation Night. Gritty is coming back to Reading, PA for the Reading Royals Affiliation Night this Saturday at the Santander Arena. Don’t miss out on history at the Royals skate on special orange ice for the first time ever in their 20 year history, an appearance from Santa on the concourse and be sure to come prepared with a gently used or new stuffed animal to be tossed on the ice after the Royals first goal for the annual Teddy Bear Toss.

In addition the first 2,000 fans in attendance will receive a limited edition Kirill Ustimenko bobblehead. Don’t miss out on the biggest game of the season as the Reading Royals go orange for one night only in Downtown Reading!