Story written by David A. McConnell 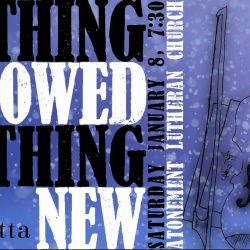 Berks Sinfonietta continues exploring the classical period symphony in works by Mozart, Haydn, Boccherini, and Swedish composer Elfrida Andrée. The concerts are Saturday, January 8, 2022 at 7:30 pm at Atonement Lutheran Church, 5 Wyomissing Blvd., Wyomissing, and Sunday, January 9, 2022 at 4:00 pm at Grace Lutheran Church, 517 N. Queen Street in Lancaster. For the safety of all in attendance, masks are required, and non-vaccinated individuals are invited to watch Saturday’s livestream broadcast for the cost of an at-will donation – more information can be found at www.berkssinfonietta.org.

Mozart’s “Symphony No. 29” is perhaps his first fully mature symphonic work. Scholar Stanley Sadie describes it as “a landmark … personal in tone, indeed perhaps more individual in its combination of an intimate, chamber music style with a still fiery and impulsive manner.” While Mozart uses expected classical compositional conventions – a gently reticent slow movement, followed by a crisply energetic minuet and joy-filled finale – there is now greater complexity and a subtler tone.

Originally written for an unknown opera, Haydn thought so highly of his “Overture la 7” that he later repurposed it as an alternate finale to his fifty-third symphony. The writing is typically joyful, brimming with energy and invention.

Wranitzky’s “Symphony in C Major” (Op. 19), signifies a high point in his career. When Franz II was crowned Holy Roman Emperor in Frankfurt in July 1792, Wranitzky was commissioned to compose a work to celebrate: this symphony was the result. It is marked by a suitably festive orchestration that includes horns, trumpets, and timpani, in music of stark contrasts, rhythmic drive, and harmonic ingenuity.

Born in Lucca, Italy, Boccherini studied music and the cello initially with his father and then in Rome. While much of his output understandably focuses on the cello, he wrote prolifically in every genre. As a youth, he toured throughout Europe gaining fame as a sensitive and virtuosic player. His “Sinfonia in D” originally served as an overture to his Il Giuseppe oratorio, but was quickly allowed to stand on its own as a three-movement symphony.

Elfrida Andrée was born in Visby, Sweden and studied with Niels Wilhelm Gade. An activist in the Swedish women’s movement, she was one of the first female organists to be officially appointed in Scandinavia. “Andante Quasi Recitativo,” one of her best-known and touching works, was premiered in May 1877 conducted by the composer.

Live concert tickets ($15/Adult & $5/Child) are available at the door and online.

Celebrate the new year with live music! Join us Saturday, January 8 at 7:30 pm or Sunday, January 9 at 4:00 pm for enthralling performances, in-person or via livestream. To learn more, please visit www.berkssinfonietta.org.