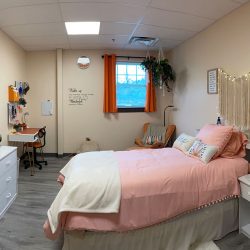 The finished room for a youth at Mary’s Shelter after the Tompkins VIST Bank team completed its renovation.

The staff of Tompkins VIST Bank’s Wyomissing branch this year donated $2,000 to refurbish a bedroom at Mary’s Shelter in Berks County and did much of the work themselves.  “I knew our staff could make the most of the funds by putting our own muscle into the project,” said Susan Belfer, branch manager. 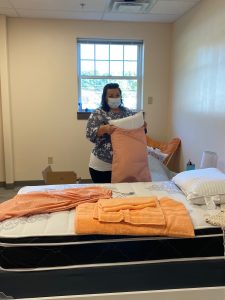 The room was part of a 17,000 square foot renovation that Mary’s Shelter conducted this year to house the growing number of homeless youth ages 16 to 21 at its facility. “The financial strain of the pandemic has caused a lot of family conflict, which prompts kids to run away or be kicked out of their homes,” said Christine Folk, executive director. The project included 20 bedrooms as well as a kitchen, living room and other rooms and offices.

The funds for the renovation came from a variety of sponsors, each of which were assigned a room. And to make this a local youth-based project, Folk invited Berks County high schools to submit designs for the rooms.

Tompkins VIST Bank’s bedroom was designed by Boyertown High School and was very detailed, said Belfer. “In addition to listing the furniture and décor, the students even suggested where the items could be purchased,” she said. 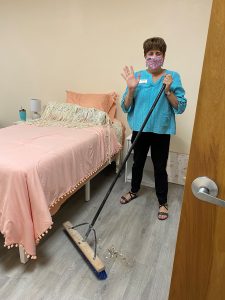 Susan Belfer, Tompkins VIST Bank Wyomissing branch manager, cleans up a room at Mary’s Shelter as part of her team’s work on the shelter’s renovation.

The Tompkins VIST staff began work on the project several months ago, when professional contractors installed a drop ceiling and flooring, and the branch’s Assistant Manager Edwin Alvarado and Senior Teller Zach Dautrich painted the room in neutral and warm earth colors. Next the staff purchased a bed frame and several other pieces of furniture, which were assembled by the bank’s facilities employees Alex Reifsnyder and Earl DeLong.  The final phase was the décor, which included adding pillows, a bedspread, curtains, wall hangings and many personalized items so that the room would feel “extra special,” said Belfer.  She coordinated the work so that all the staff, including Universal Banker Lauren Boone and Tellers Jen Ballou and Anna Gual, had an opportunity to help while also assuring that the branch continued to serve customers.  The room is now completed and waiting for its first occupant, which Folk anticipates will be in late January.

Folk commended the generosity of all the sponsors and made special mention of the Tompkins VIST team’s hard work. “They took the original design and brought it to life,” she said. “Each room is unique, just like the kids we house. We want them to feel that the community cares about them and wants them to succeed.”  Belfer and her staff agreed. “It means a lot to know that we made a room pleasant and welcoming for a young person in need and could really help the community this way.”