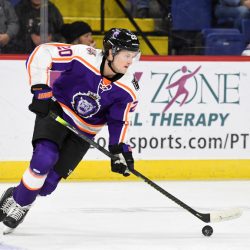 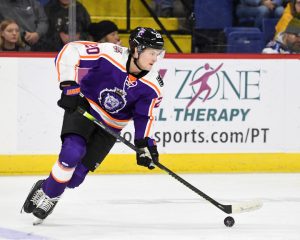 The Reading Royals, proud affiliate of the Philadelphia Flyers, and the ECHL announced Wednesday that forward Jacob Pritchard has been selected as the Royals’ participant in the 2022 Warrior/ECHL All-Star Classic.

In 22 games this season, Pritchard has recorded 8 goals and 9 assists (17 points). He has been loaned twice to AHL teams, the Springfield Thunderbirds and Rochester Americans. The 26-year-old from Macomb Township, Mich. has scored 14 goals and 17 assists (31 points) in 54 ECHL games and 2 goals and 5 assists in 35 AHL games.

In his senior season with UMass in college, he won the Hockey East Regular Season Championship and was named to the Hockey East Second All-Star Team. His performance earned him an entry-level contract with the Carolina Hurricanes, and after playing six games with the Charlotte Checkers in the 2019 AHL Playoffs, he won the Calder Cup as an AHL champion.

The last Royals player to participate in the All-Star Classic was Michael Huntebrinker in 2018’s game at Indiana Farmer’s Coliseum in Indianapolis, Indiana. He scored one goal in the three-on-three tournament, the only goal for Team North in the event. Huntebrinker was the Royals’ replacement player for Alex Krushelnyski.

Ralph Cuddemi and Steven Swavely were selected for the 2020 and 2019 All-Star Classics, respectively, but did not participate as they were called up to the AHL (Cuddemi to Laval and Swavely to Lehigh Valley).

In total, 20 players from the Royals’ history have participated in the ECHL All-Star Classic over the previous 19 seasons of the team. If Pritchard plays, he will be the 21st member of Reading’s franchise to partake in the event.

The Jacksonville Icemen will host the game following its postponement from 2021 due to the COVID-19 pandemic. In the current format, the Icemen – led by head coach and former Royals assistant coach and captain Nick Luukko – will take on the ECHL All-Stars over three 24-minute, running clock periods. The first two periods will be played at five-on-five, while the third period will be played at three-on-three. If the game is tied following the third period, there will be a rapid fire, sudden death shootout.

Between periods, the Skills Competition, presented by Mugwump Productions, will take place. The winner of each skills contest will be awarded a goal towards their team. The contests include the Fastest Skater, Hardest Shot, and Accuracy contests.