The governor and top lawmakers are facing a Jan. 30 deadline to complete the congressional map, or the state courts will take over. 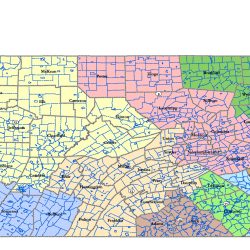 HARRISBURG — A state Senate panel voted Tuesday to advance a redrawing of Pennsylvania’s congressional map as a top Republican expressed hope that his party and Democratic Gov. Tom Wolf could still reach a compromise with a court deadline looming.

Nonpartisan analysts say the map, first proposed by House Republicans, has a clear GOP advantage. While stopping short of vowing a veto, Wolf previously said he opposes the map in its current form and expressed concern regarding the map’s partisan bias.

Wolf and lawmakers face two major deadlines. The state’s top election official has said her department needs a final map no later than Jan. 24 to meet the first of several spring primary deadlines. And Commonwealth Court has given those in charge of drawing the map until Jan. 30 to do so before it takes over the process.

The chairs of the Senate State Government Committee — David Argall (R., Schuylkill) and Sharif Street (D., Philadelphia) — had previously pledged to release their own proposed map. Argall on Tuesday was still focused on getting Wolf something the governor would sign.

“Bipartisan negotiations have been ongoing with Sen. Street and others in the hope that we can reach a compromise that can be agreed to by a majority of all four caucuses, signed by the governor, and approved by the courts, which has been our shared goals since this process began,” Argall said.

Street said he would not vote for the map in its current form but appreciated “the spirit in which we’re moving forward.”

If Democrats and Republicans can reach a compromise, Argall’s office said the current congressional proposal would be amended in order “to avoid delaying the primary.”

But with the clock ticking, it has become increasingly likely the final map will be picked by the state courts as part of an ongoing lawsuit.

Two groups of citizens in December asked Commonwealth Court to take over the process in order to maintain the date of the May primary. In recent days, the court said it would allow Wolf and lawmakers from both major parties to intervene and submit their own proposed maps by Jan. 24. Hearings are scheduled for the following Thursday and Friday.

In its initial form, the congressional map under consideration in the legislature was drawn by Amanda Holt, a former Republican Lehigh County commissioner and well-known redistricting advocate.

However, it was amended in the House State Government Committee after Republican members objected to the ways their counties were split. That version was introduced to the public and advanced by the panel at the same meeting.

Wolf recently released his own proposed congressional map, saying it and a citizen-drawn map championed by Draw the Lines — an initiative of the good-government organization Committee of Seventy — were “free of gerrymandering” and in line with principles released by the governor’s advisory council.

Both Wolf’s map and the proposal in the legislature fulfill four basic fairness criteria embraced by the Pennsylvania Supreme Court.

But while redistricting reform groups said the Republican-advanced map does not reflect the partisan makeup of the state, Wolf’s map does, nonpartisan metrics show.

An analysis by the Princeton Gerrymandering Project for The Inquirer found Wolf’s map would create nine Democratic or Democratic-leaning districts and eight Republican or Republican-leaning ones. Because of sluggish population growth, Pennsylvania is losing one of its 18 congressional seats this year.