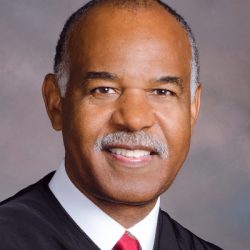 Roger L. Gregory, Chief Judge of the United States Court of Appeals for the Fourth Circuit, will be awarded an honorary doctorate and offer remarks at Albright College’s 162nd Commencement ceremony, at Santander Arena, Sunday, May 15, 2022.

Judge Gregory is the first African-American to sit on the United States Court of Appeals for the Fourth Circuit and the only person in the nation’s history to be appointed to a federal appellate court by two presidents of different political parties (Bill Clinton, George W. Bush).

Formerly a partner in the law firm of Wilder & Gregory, Judge Gregory grew up in Petersburg, Virginia and graduated from Virginia State College and the University of Michigan Law School. President William J. Clinton recess appointed him to the Court on Dec. 27, 2000, and President George W. Bush commissioned his lifetime appointment to the Court in July 2001. He became Chief Judge on July 9, 2016. He is a member of the Judicial Conference of the United States that governs the Federal Judiciary. The Fourth Circuit includes the states of Maryland, West Virginia, Virginia, North Carolina and South Carolina.

By appointment of the Chief Justice of the United States, Judge Gregory served on the Brown v. Board of Education 50th Anniversary Commission established by the President and Congress to commemorate that landmark decision.

“I was humbled to learn that I will receive an honorary degree from Albright College – a top-rated institution of higher learning where academic excellence, accessibility and affordability are truly priorities,” said Judge Gregory. “I look forward to informing the graduates of my personal journey and, hopefully, inspiring their journey that lies ahead.”

Albright College president Jacquelyn S. Fetrow, Ph.D. ’82 remembers listening to Judge Gregory ask terrific questions while he was a trustee of the University of Richmond. “He was always focused on how every institutional decision would impact students and how those decisions would be handled equitably,” she said. “These are questions that matter at Albright College, too, and I am certain that all of us will be inspired by his message, his life, and his career journey.”

Named a top national college by Wall Street Journal/Times Higher Education, Albright College (founded 1856) is home to a diverse community of learners who cultivate integrity, curiosity, connection and resilience. Through learning experiences that engage a student’s creative and innovative capacities across all disciplines, both inside and outside of the classroom, an Albright College education guarantees that each student learns how to engage the world, understand the world, and is prepared to make an impact on a rapidly changing world. Located in Reading, Pa., Albright is home to undergraduate students, adult learners and graduate students.