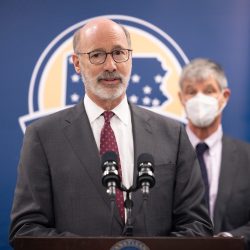 Gov. Tom Wolf is calling for sweeping investments to make higher education more affordable with a focus on programs with workforce needs. The average student debt for Pennsylvanians now stands at $39,000, one of the highest in the country.

As part of his final budget proposal, the governor is requesting $200 million for the Nellie Bly Scholarship Program to support students who attend a community college or one of the 14 state universities.

Wolf said it is about providing people with more opportunities to get a college education without overwhelming debt.

The scholarship would be funded by both the American Rescue Plan and the Race Horse Development Trust Fund, the latter coming from taxes on slot machines at racetracks. Wolf previously has attempted to fund the scholarship program with the Trust Fund but has received pushback from the horse-racing industry, which said it would hurt it financially.

Kellen Johnson, a student at Harrisburg Area Community College’s paralegal studies program, said as a father of two young kids, his furthest concern should be worrying about paying tuition and books. He contended scholarships such as Nellie Bly can ease the burden on students.

“A lot of our students come to Zoom classes with cellphones,” Johnson pointed out. “Just extra funding for some of our students really goes a long way. A lot of this can help us focus on other things that actually truly matter, like homework assignments and studying for exams.”

The Nellie Bly scholarship is needs-based and can cover tuition, along with other expenses such as housing and books. It will prioritize students pursuing degrees in fields facing worker shortages, such as health care and education. Scholarship recipients must also agree to stay in the state for the same amount of time they received the benefit.

Support for this reporting was provided by Lumina Foundation.