The map closely resembles the current one, with Democrats and Republicans each expected to win roughly eight seats with one district a toss-up. 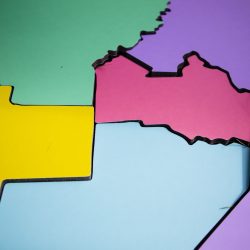 IMAGE: The map closely resembles the current one, with Democrats and Republicans each expected to win roughly eight seats with one district a toss-up.

HARRISBURG — The Pennsylvania Supreme Court has selected a new congressional map that closely resembles the current one, a ruling unlikely to dramatically change the partisan makeup of the state’s delegation.

In a 4-3 decision Wednesday, the high court picked a proposal submitted by a group of Pennsylvania voters that fulfills four traditional redistricting criteria and has a slight Republican bias.

The state Supreme Court agreed to assume control of the highly consequential process in early February, just weeks after Gov. Tom Wolf vetoed a map sent to him by Republicans.

The five-page order does not explain the Democrat-controlled court’s reasoning. It notes that Justice Debra Todd, a Democrat, and the court’s two Republicans — Justices Sallie Updyke Mundy and Kevin Brobson — dissented to the selection of the Carter plan.

The state Supreme Court also announced Wednesday it will not move the date of the May 17 primary, opting instead to adjust some of the earlier deadlines for candidates.

The Pennsylvania legislature must redraw the state’s congressional boundaries every 10 years to account for population changes reported by the census. The governor has the ability to accept or reject the map.

The map approved by former Republican Gov. Tom Corbett in 2011 became a national example of partisan gerrymandering, or when political boundaries are drawn for unfair partisan gain. Despite statewide victories for Democratic candidates, Republicans consistently won 13 of Pennsylvania’s 18 congressional seats.

The Pennsylvania Supreme Court threw out the map several years later for that reason and — after Wolf and the legislature failed to agree on a replacement — implemented one that is split evenly between Democrats and Republicans.

Because of sluggish population growth between 2010 and 2020, the state lost one of its 18 seats, raising the stakes in what is already an intensely political process.

The Republican-controlled legislature in January sent Wolf a map that nonpartisan analysis showed had a strong GOP bias. Wolf vetoed the map for its partisan lean, calling it “highly skewed.”

In a statement responding to the ruling, House GOP leaders said their map was the only one that “followed all constitutional guidelines [and] went through a deliberative legislative process.” They also noted that the map “was endorsed by a judicial body,” referencing a report by Commonwealth Court Judge Patricia McCullough, a Republican.

At the state Supreme Court’s request, McCullough put together a document that recommended the legislative Republicans’ map on the basis that it was “functionally tantamount to the voice and will of the People.”

“Sadly, candidates and voters must now submit to a unilateral court that sees itself above every person in our commonwealth,” House Speaker Bryan Cutler (R., Lancaster) and Majority Leader Kerry Benninghoff (R., Centre) wrote in the statement.

On Wednesday, Wolf called the court’s pick a “fair map that will result in a congressional delegation mirroring the citizenry of Pennsylvania.”

The map selected by the high court was submitted by a group of voters known as the Carter petitioners, who brought a lawsuit in December asking the state courts to take over the process in anticipation of an impasse between Wolf and Republican lawmakers.

They were represented by several law firms, including one founded by Marc Elias, a well-known Democratically-aligned elections lawyer.

The Carter petitioners’ plan is very similar to the current congressional map, with nearly 90% of residents staying in the same district. One of their attorneys, Matthew Gordon, told the court last Friday that this approach of “least change” should be valued over other considerations.

Jonathan Rodden, a political science professor at Stanford University who drew the map, said in an expert report that his plan produces eight districts “where Democrats are expected to win,” another eight “where Republicans are quite likely to win,” and one district “that is a toss-up with a very slight Democratic lean.”

“This level of partisan balance and competitiveness is similar to that of the existing plan, reflective of Pennsylvania’s statewide partisan preferences, and consistent with changes in population as they relate to partisanship,” Rodden wrote.

PlanScore, a nonpartisan analysis tool, produced similar findings. Using past election data, it categorized six of the seats as Democratic and six as Republican, with two leaning Democrat and three leaning GOP.

Partisan fairness can be measured using several mathematical tools and metrics that are increasingly being embraced by the courts. One of those metrics is called the efficiency gap, which indicates the number of “wasted votes” in each election or the number of votes that don’t contribute to a candidate’s victory.

The difference in efficiency between the two parties should be as small as possible to represent an unbiased map.

The Carter map, according to PlanScore, has a 1.6% efficiency gap, representing a slight GOP bias. The map approved by the GOP legislature, on the other hand, has a 6.6% efficiency gap favoring Republicans. Nicholas Stephanopoulos, a law professor who helped invent the efficiency gap metric, has said that he would consider a score of 7% or above indicative of gerrymandering.

In his report, Rodden said changes to the map largely reflect population shifts seen in the state over the past decade. While rural areas throughout the state lost residents, urban and suburban areas — especially in the southeast — grew.

Because of those trends, U.S. Rep. Fred Keller’s 12th District was eliminated and he was drawn into the 15th District with another Republican, incumbent U.S. Rep. Glenn Thompson.