From County of Berks 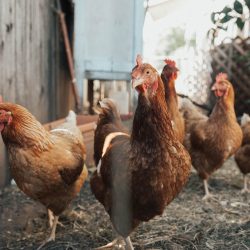 Reading, PA — Due to the significant poultry sector within Berks County’s agriculture economy, the Berks County Commissioners are sharing the following biosecurity alert from Penn State Extension for poultry owners regarding the detection of Highly Pathogenic Avian Influenza (HPAI) in commercial flocks, small backyard hobby flocks and migratory birds in the United States. The CDC said these detections do not present an immediate public health concern and no human cases have been detected in the United States. However, it can be a devastating disease for poultry. While there have been no detections in Berks County, it is important for poultry owners to take appropriate precautions now to prepare and protect their flock.

The alert states that the U.S. Department of Agriculture’s Animal and Plant Health Inspection Services has reported 247 positive wild birds in nine states along the East Coast. Six states now have confirmed outbreaks in commercial and backyard flocks. The most recent outbreak was confirmed Wednesday at an egg-laying facility in Delaware.

Penn State Extension said faculty members and extension educators are serving on a statewide avian flu task force chaired by the Pennsylvania Agriculture Secretary. The group has developed action plans and procedures related to biosecurity; depopulation and disposal of infected flocks; issues relevant to small or backyard flocks; and other concerns.

Any further inquiries should be directed to Dr. Gregory Martin, Penn State Extension Poultry Educator, at 717-394-6851 or [email protected].