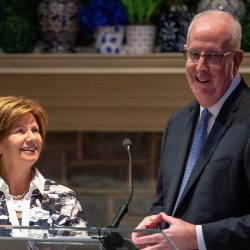 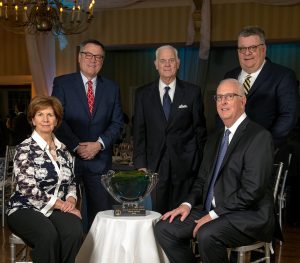 In honor of their unwavering commitment to improving the quality of life for others, Berks County couple Julia Klein and Eric Jenkins were presented with the Thun Award at a private ceremony on Saturday, April 2.

Berks County Community Foundation, in partnership with Fulton Bank, held the Celebration of Giving at the Berkshire Country Club to thank Klein and Jenkins for their community contribution, engagement, and philanthropy.

The Thun Award is presented to Berks County residents who generously give of themselves for the sake of making Berks County better, said Al Weber, Community Foundation board chair.

“The leadership from Julia and Eric in our community has been extraordinary,” said Jeffrey R. Rush, Senior Executive Vice President and Director of Commercial Sales at Fulton Bank. “Julia and Eric embody the leadership and love for this community that is found in all of the recipients of the Thun Award.” 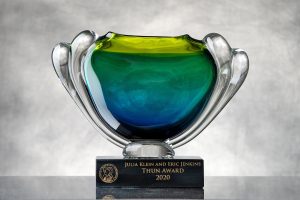 Recipients of the Thun Award recommend a $5,000 grant to a nonprofit organization of their choice. The money comes from the Thun Award Fund, which was established by Berks County Community Foundation. Klein and Jenkins chose to give the grant to Berks Community Health Center.

“When I learned that Julia and Eric had chosen us to receive this grant, I was not surprised,” said Mary H. Kargbo, president and CEO of the Health Center, during the Celebration of Giving dinner. “Julia was one of the first people to tour our facilities and learn more about us and our services when we first opened in 2012. This grant helped to provide much-needed medication for patients being treated for opioid use disorder.”

Berks Community Health Center is committed to improving the health of our community through the delivery and coordination of affordable, comprehensive, culturally sensitive patient- and family-centered healthcare. 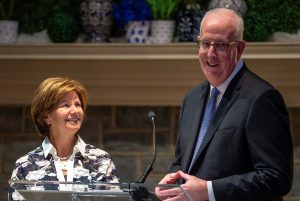 Julia, a native of Berks County, and Eric, a native of Indiana, Pa., met as teenagers at a summer camp. They were married in 1989 and have one son, Ethan.

Julia is Chief Executive Officer and Chairwoman of C.H. Briggs Company, Inc. She began her career as the Deputy Director of the YWCA in Reading. She then moved to political campaigns before stewarding and growing her third-generation family enterprise. C.H. Briggs is one of the largest independently owned distributors of building materials in the country. The company is headquartered on a 9-acre site in Reading.

Eric is President of Jenklein, LLC, a real estate and investment holding company. He also serves on the Briggs Board of Directors, where he renovated, redeveloped, and built the Reading property and initiated the company’s green building efforts.

College of Wooster; gubernatorial appointee to the Pennsylvania Early Learning Investment Commission; board member of Reading Health System; and much more.

The Thun Award was created in 1988 to recognize the lifelong commitment that was shown by Ferdinand K. and Louis R. Thun to improve the quality of life in Berks County through philanthropy. Since that time, the award has been presented to Berks County residents who make significant contributions of civic service and who exhibit a steadfast commitment to the community. Not long after its founding in 1994, the Community Foundation became a partner in the Thun Award. Recipients of the award exemplify the mission of the Foundation: to promote philanthropy and improve the quality of life for the residents of Berks County. Fulton Bank has been a partner in the Thun Award for many years.