A.J. Merlino: Percussionist, Professor, and Peer of the Music Industry 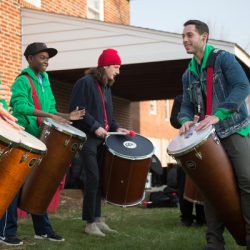 When you think of the Grammy’s, what usually comes to mind? Most likely, you are imagining the music award ceremony that occurs every year. However, the foundation does a lot more than present star-studded trophy shows.

A.J. Merlino thought the very same, until he was first nominated in 2017 for the Grammy Foundation’s Music Educator Award.

The Music Educator Award is given to teachers who “have made a measurable difference in the lives of students” and “have shown a commitment to the broader cause of maintaining music education in our schools.”

Fast forward to the present, Merlino has been a Grammy quarter-finalist four times in the last five years. Quarter-finalists are determined by initial applications and then asked to send in supplemental materials if chosen. Not many educators can say they have been nominated for such a prestigious award.

“Most people don’t become teachers [in general] to get recognition or get awards,” explained Merlino. “To have national recognition is a really cool thing for something that you do [every day].”

But what does Merlino do every day? That is a loaded question for someone with his extensive resume and busy routine. He currently has a few different roles at Albright College including Associate Dean, Director of Music Industry Studies, and Assistant Professor of Music.

However, it took an interesting journey for Merlino to reach where he is today.

“It’s a great music city. Live music was always around, so I had the benefit of having great venues, bars, and restaurants that I could just go listen to music.”

Local Jersians looking to make it big would flock to venues all around the town to show off their musical talents. When Merlino started pursuing music around the age of 13, it did not take him long to book his first gig at a bar.

“It’s just a great music and gigging scene and it just shaped my perception of the industry,” Merlino said. “If I grew up in a different area of the country, I probably wouldn’t have gotten into music.”

Besides cultural influences, Merlino’s father also played a part in his path into the music business. He took inspiration from his father’s musical taste, which ranged from Afro-Cuban percussion to Motown.

With drum lessons and high school band experience under his belt, Merlino then attended Kutztown University where he obtained his first degree in Bachelor of Arts in Music. He spent much of his time with the college’s World Percussion Ensemble, which traveled to music festivals and workshops all around the globe, and he even learned basic piano.

Though, his higher education journey did not stop there. Merlino went West to receive two more certifications, his master’s degree in Music and doctorate in Musical Arts, at the University of Nevada, Las Vegas. Being in the entertainment capital of the world, he had plenty of opportunities to showcase his talent and put his marketing skills to the test.

“I was constantly challenged as a performer, as a composer/arranger, and as a businessperson. I always learned something new, and it kept me on my toes,” he explained.

Despite the ever-growing, saturated competition in the city, Merlino was able to perform a wide array of gigs in his four years. His devoted time as a project manager for three of the largest talent agencies in Vegas gave him the proper connections for booking different venues along the strip.

He never grew bored as, besides his college studies, there were always gigs to play, time to rehearse, and artists to source. Merlino usually spent anywhere from 12 to 15 hours, almost every day, playing music. While that might sound exhausting to the non-musician, he loved having such a hectic schedule.

During his last year, while still earning his doctorate, Merlino was hired at Kutztown University to fill the position of his former mentor, Frank Kumor, who left on sabbatical. He spent that short amount of time as the Director of Percussion Studies and the conductor of the World Percussion Ensemble.

When Merlino’s time as a substitute replacement came to an end, he was on the search for a full-time teaching position. Luckily, Albright College was searching for a new director of the Music Industry Studies program, which he received in 2015.

“It just kind of happened at the right time.”

Though, it was not a full major until Merlino arrived at Albright and helped shape the program with its different business courses. He crafted each class to synchronize, so the students would be learning multiple aspects of the industry at the same time from opposite angles.

“It’s a great way of creating this system of mentorship and functional knowledge. You go from ideation to application within the same week of knowing something exists,” Merlino said. “It just transitions really well.”

Because of his passionate nature, Merlino wanted another task on his plate besides being the Director and Assistant Professor of Music. So, in 2019, he added Associate Dean of Student Professional Development & Experiential Learning of Albright College to his long resume.

“I wanted to have a broader impact on higher education, and I thought through administration would be the way to do that.”

His prior experience working in project and talent management has been a huge aid in helping build strategic partnerships with outside resources. On a daily basis, Merlino forms solid relationships with graduate schools, different employers, and build programs to help students find employment post-graduation.

“The ELCDC allows me to pull from my knowledge from talent management to use that same skillset, but to help students at Albright.”

“I can truly see that he cares about me and the rest of his students. It’s evident that he wants us to grow as musicians, students, and people, and that he puts in the work on his side to allow that to happen,” Trace said. “He thinks in the big picture, and it’s because of him that our music program is as successful as it is. I can really recognize it, and it feels good to know I have a professor who goes above and beyond and really wants the best for us, and for us to have every opportunity we can.”

Rachel Carraghan, another student in the Music Industry Studies program, also had some input on Merlino’s teaching and mentoring skills. She added, “He doesn’t just do his job and that’s it, he goes beyond that and puts everything he has into it.”

Merlino has been both a professor and a mentor to his many students in the program. His impact has been and still is valuable to all students wanting to go into the music industry.

“One piece of advice that A.J. has engrained into each student from the beginning is to take every opportunity there is and go for it. If it benefits you in some way, do it. Take the chance and gain more experience wherever and whenever you can,” explained Carraghan.

As for Merlino’s future, he has no idea what path he’ll take, but he’s always looking for a new adventure. For now, he plans on being occupied with his ever-growing list of responsibilities at Albright as well as keeping up with performing.

“I don’t need much alone time or time for reflection in my life. I like staying busy. I like a little bit of chaos. For me, if I was doing less, I would probably try to pick up something else,” Merlino explained. “My existence is being busy.”

Currently, Merlino does not have any performances scheduled due to the COVID-19 pandemic, but you can listen to his latest percussion work with We Used to Cut the Grass here.