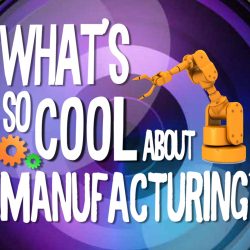 READING, Pa.  – Online voting for the sixth year of the “What’s So Cool About Manufacturing?” (WSCM) student video contest will remain open until Friday April 8th, 11:59PM at the https://www.whatssocool.org/ website. The winner will be announced during this year’s awards event on Monday, April 25th.

Twenty-nine student teams compete for the most votes to win the coveted “Viewers Choice Award.” The videos will also be reviewed by a panel of judges for awards in nine other categories, including Outstanding Career Pathway, Outstanding Editing and Outstanding Creativity.

“Voting should be extremely enticing this 6th season of the program! The social media engagements we have received so far from student teams and partnering manufacturers promoting What’s So Cool About Manufacturing in Berks and Schuylkill Counties have increased sharing, commenting, and creating of new posts,” said Terri Lampe Melcher, Business Development Manager at MRC. “The whole community is encouraged to participate in voting for Berks and Schuylkill student team videos to see and support the hard work the students, teachers, and manufacturers have put into broadcasting their messages about what is so cool about manufacturing careers and technologies.”

The WSCM contest, presented by MRC, gives students a new perspective on modern manufacturing as they engage with local manufacturers, recording and presenting their experiences in an educational and “cool” way through documentary video production.

The program was created to generate excitement that draws students toward CTE and STEM education opportunities and to consider manufacturing career paths.

About “What’s So Cool About Manufacturing”™: Developed by Manufacturers Resource Center (MRC), WSCM program is a video based educational tool that increases awareness of career paths and technology in manufacturing through “peer marketing” (kids telling kids what’s so cool about manufacturing jobs.). The contest is showcased on the What’s So Cool Website and shared nationally through the Manufacturing Institute and the Manufacturing Extension Partnership platforms.  The Berks Schuylkill contest has expanded across the Commonwealth and the country.  The WSCM Video Library was created as a digital resource showcasing more than 500 Pennsylvania manufacturers.

This contest gives students the opportunity to connect with local manufacturers, document their experiences and present them in an educational and “cool” way. The contest was created to generate excitement that draws students towards manufacturing career paths, and CTE and STEM education. Original funding for “What’s So Cool About Manufacturing?” was furnished by a grant from the Pennsylvania Department of Community and Economic Development (PADCED).

For 33 years, the Manufacturers Resource Center (MRC) has helped small and mid-sized manufacturers become more competitive, adopt lean and agile processes, strategically grow their companies and invest more effectively in advanced technologies and their existing human capital. MRC is a nonprofit organization partially funded by the U.S. Department of Commerce’s NIST-MEP program, as well as the State of Pennsylvania’s Department of Community and Economic Development. The MRC is dedicated to creating jobs and economic opportunity in eastern Pennsylvania’s Berks, Carbon, Lehigh, Northampton, and Schuylkill counties.