by The Office of Rep. Chrissy Houlahan 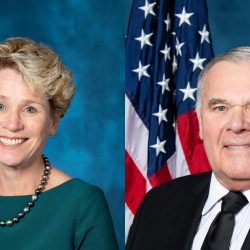 “Our community, Commonwealth, and country are made stronger because of dedicated public servants, and as a former AmeriCorps participant, I’m proud to introduce this commonsense reform to help our nation’s teachers, law enforcement officers, nurses, and others.” said Houlahan. “When Pennsylvanians and Americans dedicate a decade of their lives to serving our communities, they deserve our support to cut through bureaucratic delays and receive their student loan forgiveness.”

“The Public Service Loan Forgiveness program is an investment our nation has made in our public services to help funnel high quality, well-educated public servants into these often under-paid and under-appreciated positions,” said Baird. “Unfortunately, this program has a critical flaw that can short-change some of these borrowers who have given a decade or more of their life to public service. I’m pleased to join Rep. Houlahan in making the necessary changes to this program so that it fulfills its original intention.”

Reps Houlahan and Baird hope their legislation will improve applicant success. Data from the Department of Education demonstrates how the many ancillary requirements of the PSLF program significantly impedes the applicant success rate. Out of the 442,277 individuals who met employment certification and Direct Loan requirements and submitted program forms through September 2021, 98% did not immediately qualify because they did not meet other PSLF requirements, such as the onerous provision addressed in this legislation.

This bipartisan, commonsense legislation has been endorsed by numerous organizations, including:

“More than a decade ago, Congress created the Public Service Loan Forgiveness program to help make college a more affordable and accessible reality for those seeking careers in public service,” American Federation of Teachers (AFT), President, Randi Weingarten. “The program was intended to ensure crushing student loan debt wouldn’t sentence future teachers, nurses, first responders and other public service workers to a lifetime of hefty payments. The PSLF Payment Completion Fairness Act would permanently eliminate one of the unnecessary hurdles that has been a barrier for many trying to access relief: the requirement that borrowers must be working in public service at the exact time their loan is forgiven. As long as they have a history of documented public service employment, borrowers would still be eligible for PSLF even without current public service employment. As the administration works to further improve the PSLF program, Congress also must consider these important fixes that preserve and strengthen PSLF and sign these improvements into law.”

“NASW applauds Representatives Houlahan and Baird for their leadership in introducing the PSLF Payment Completion Fairness Act, as it represents an important step towards eliminating barriers to public service loan forgiveness and achieving the original intent of the PSLF program,” National Association of Social Workers (NASW), Director of Public Policy, Sarah Christa Butts, MSW. “Many Social workers and other public service professionals across the country, have been denied the promise of PSLF forgiveness, after completing years of qualifying public service. Social workers are struggling with the crushing burdens of student loan debt, and this bipartisan legislation removes a key barrier to PSLF forgiveness for those having devoted their careers to public service.”

“Public service workers devote their careers to making their neighborhoods safer, healthier, and stronger – and their jobs often require college degrees,” AFSCME, President, Lee Saunders. “They often pass on opportunities to earn bigger salaries in the private sector because they are called to public service. But like too many working people, they struggle to make ends meet because they are saddled with the crushing burden of student debt. This bipartisan bill would ensure that those who put their communities first are eligible for the relief they have earned and recognized for the sacrifice they make.”

“Members of the National Education Association enthusiastically support the bipartisan Public Service Loan Forgiveness Payment Completion Fairness Act, which takes a huge step toward fulfilling the promise of the PSLF program,” National Education Association, Director of Government Relations, Marc Egan. “Educators and other public servants who have met the requirements for loan forgiveness should not be denied what they were promised because they have retired or moved on. The 100,000 borrowers who have been approved for PSLF under the Department of Education’s Limited Waiver tells us how desperately needed this legislation is; it offers a permanent fix to a serious problem. NEA members and retirees applaud Congresswoman Houlahan for taking action and standing up for fairness.”