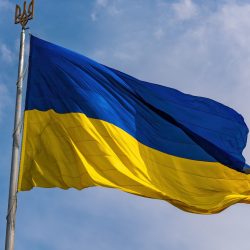 Ahead of the Easter holiday, a Ukrainian Catholic bishop based in the U.S. shares reflections from a recent visit to the country’s border.

Bishop Bohdan Danylo of the Ukrainian Catholic Eparchy of St. Josaphat, which includes parishes in western Pennsylvania, was at the Poland-Ukraine border for a week. He visited the Polish border city of Przemysl, his childhood home, which has become a major entry point for displaced Ukrainians.

Danylo said along with sharing donations and meeting with clergy and volunteers, he wanted to bring back to the U.S. the realities of what Ukrainians are facing.

“It’s a horrific image. Those people are searching for food, for water, for medicine and especially for shelter,” Danylo explained. “Those who are already in Poland, they still have half of their family – let’s say husband, sons or fathers – in Ukraine, so those families are split. They are worrying about what is happening.”

Danylo, who got back April 1, was the first U.S. bishop to travel to the Ukrainian border following Russia’s invasion. Since February, more than 11 million Ukrainians have fled the country, according to United Nations’ estimates.

Danylo said there are many ways people in the U.S. can help those displaced by the conflict. The nonprofit Catholic Extension is providing aid to help shelter, feed and evacuate vulnerable families in the country. Danylo predicts the devastation Ukrainians are experiencing will have a long-term impact.

“For the last 20 years, young men and women in American armed forces, when they come back from the combat zone, they are scarred,” Danylo observed. “They have their own issues. And here, you have a nation of 40 million basically living in a combat zone. So pray, tell the truth, and if you are able to help, help.”

Pennsylvania has the second-largest Ukrainian population in the country. Groups, including the United Ukrainian American Relief Committee, are seeking donations of medical supplies, hygiene products and more.