To successfully use Pennsylvania’s ‘compassionate release’ law, he had to choose to die

A late-stage cancer diagnosis left Bradford Gamble with a difficult decision: Receive treatment in a Pennsylvania state prison or die on the outside. 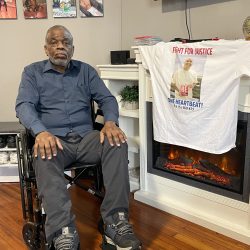 IMAGE: Bradford Gamble is one of only 33 people who have successfully petitioned to leave a Pennsylvania state prison in the past 13 years because of illness.

PHILADELPHIA — If Bradford Gamble wanted to leave state prison, he had to decide to die.

He found out about his late-stage cancer diagnosis unceremoniously: A guard dropped a piece of paper into his cell without a word. After months of pain, confusion, and waiting he had answers: metastatic colon cancer that had already spread to his liver.

Gamble spent his entire adult life inside the walls of Pennsylvania state prisons. He was sentenced in 1976 for a murder he committed when he was 19 years old, an action he’s come to deeply regret.

His cancer diagnosis at age 65 gave him an opportunity to use a little-known Pennsylvania law that allows terminally ill people to leave prison, but only if they have less than a year to live. For people serving life, it’s one of the only ways out.

So Gamble had a decision to make: get treatment to prolong his life and stay in prison, or come home for good and die.

He chose to die. He has six months to a year left to live, he told Spotlight PA during an interview.

“I’m not even concerned about the time because God, you know, got his hands in that,” he said. “I’m here, and we really need help. … We need somebody to speak up for us.”

In 2018, former President Donald Trump signed a law expanding the number of people who qualify for release from federal prisons due to age, illness, or other extraordinary circumstances.

Many states have their own versions of “compassionate release” laws that allow older people and those with serious medical issues to leave prison for better care. But in Pennsylvania, the law is so narrowly written it creates a life-or-death decision for people like Gamble.

The statute, established in 2009, allows older and sick people to transfer from prison to a hospital or long-term care facility if they have less than a year to live, or to a hospice if they are terminally ill and unable to walk. If the person gets better, the Department of Corrections or a state prosecutor can ask a court to send them back to prison.

“The statute is drafted so narrowly that it forces you to make decisions like forgoing lifesaving treatment in order to get even the possibility of medical transfer,” said Rupalee Rashatwar, an attorney with the Abolitionist Law Project, a public interest law firm that represented Gamble in his transfer petition.

Gamble is one of only 33 people who have successfully petitioned to leave prison in the past 13 years because of illness. Two more petitioners have been successful since Spotlight PA investigated the law in March.

Gamble didn’t know about the process until he met an incarcerated activist, Bryant Arroyo, who helped him scour the prison law library for any means of getting out. They called dozens of state lawmakers, attorneys, and activists on the outside before discovering the compassionate release statute.

“He was so adamant about not dying here under these particular circumstances that he was willing to do exactly what he needed to do in order to try to obtain his release,” Arroyo said over the phone. “And I told him that there was no guarantee.”

Bradford Gamble now lives with his nephew in West Philadelphia. During the interview, he sat under a wall of art that spelled out “HOME,” surrounded by photos of family that grew up without him.

A shirt Gamble designed hangs next to him. It features an image of Arroyo, standing with a book and smiling, wreathed by the words “Fight for Justice” and “One Heartbeat.” Under the text, the shirt also displays the bill number for legislation that would replace the current compassionate release law and establish more flexible parole opportunities based on age or illness.

“I came up with that because it’s many men and women, but we all had the same heartbeat as far as getting home to our loved ones,” Gamble said.