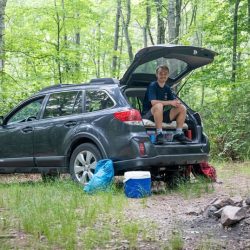 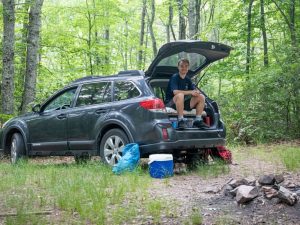 After Nathan Bonslaver graduates from Penn State Berks on May 7, 2022, he will be closing the door on one chapter while opening the door to another. Not only is Bonslaver the co-founder of CarToCamp, which provides universally fitting SUV sleeping platforms for car camping, but he was also one of six selected to participate in the Invent Penn State Summer Founders Program, a 13-week accelerator program that provides funding and resources to develop startups.

Bonslaver explains that the idea for CarToCamp came to him as he was driving across Kansas as part of a two-month cross-country road trip which he embarked on during the coronavirus pandemic. Opting to sleep in his car at campgrounds instead of in a tent, he quickly discovered that this popular style of camping required two things: a sturdy bed that fit the vehicle and organized storage options to help maximize space.

He explains that he was a customer before he became an entrepreneur. “The problem is that a lot of people enjoy car camping but there was no solution on the market for a ‘no-tools and no-assembly-required’ sleeping platform that ships directly to the customer. Our product fits 95 percent of top selling SUVs in the American market.”

Bonslaver, a mechanical engineering major with a minor in business, reached out to two friends: Robert Miller ’19 and Kevin Gulick ’20, both Penn State Berks mechanical engineering alumni who he met while he was completing an internship at Carpenter. They had bonded over their mutual interest in the outdoors and ‘car camping’ so it made sense for them to join forces. CarToCamp was officially founded in September 2020.

They began working on the product concept and ultimately landed on a universally fitting sleeping platform rated for up to 500 pounds, while remaining relatively lightweight at 40 pounds and including ample storage. The patent-pending platform can be assembled without tools and it ships directly to the customer’s door.

The group got to work building a spreadsheet of vehicle specifications – lengths and widths – for their sleeping platform. Then, after six rounds of designing, prototyping and testing, their product was optimized for manufacturing.

Bonslaver worked with the Berks LaunchBox, a Penn State Berks innovation hub, to develop his product. The Berks LaunchBox connected him with the resources he needed to apply for a patent and to mentors who advised him on such issues pricing and preparing pitch decks.

“We owe everything to the Berks LaunchBox,” states Bonslaver. “Their pitch deck competitions helped us to craft and refine our pitches and they helped us to apply for a patent. They put us in contact with the Small Business Development Center, the Happy Valley LaunchBox, and other organizations. They connected us with all the right people at the right time. The people who we have met and the connections to mentors has been invaluable.”

From there, Bonslaver got involved with as many Invent Penn State and LaunchBox competitions as he could.

Earlier this year, CarToCamp was one of six student startup teams selected as finalists in the Invent Penn State Inc.U Competition where they competed for $30,000 in funding on “The Investment,” a WPSU Shark Tank-like television production that was livestreamed during Penn State Startup Week. CarToCamp and another team were both awarded $15,000 in the competition.

These six teams were then invited to present their startup to investors from across the country at the Invent Penn State Venture & IP Conference, April 28-29, during its Student Startup Showcase.

During Penn State Startup Week, Bonslaver stayed in State College so he could participate in all the events and activities. Later that month, he took first place during the 2022 Mont Alto LaunchBox LION Tank™ pitch competition and received the top prize of $1,500.

Most recently, CarToCamp was selected into the 2022 Invent Penn State Summer Founders program. Each student team will receive a $15,000 grant to work full-time on its startup over the summer. Summer Founders teams will work at Happy Valley LaunchBox, which will provide programming as well as 24×7 access to its space. Teams will also receive mentorship and have access to a network of more than 60 advisers, plus up to $3,000 for customer discovery through the Invent Penn State NSF I-Corps program, among other benefits.

Bonslaver is extremely excited about the Summer Founders Program. He will move to State College the week after graduation and work on CarToCamp full-time, while the other two members of the team will continue their work with the company, in addition to their full-time engineering positions.

He states that he plans to use the funding to outsource the manufacturing of the sleep platforms, which the team currently assembles in his father’s garage in Exeter Township, Pa.

Despite the fact that they haven’t begun to market their product, CarToCamp has already sold four units and shipped them to Colorado, Utah, Missouri and New Hampshire. The only form of advertising they placed was a post in a Subaru car camping group that Bonslaver – a Subaru Outback owner – belongs to.

When asked how Penn State Berks has prepared him for his future as an entrepreneur, he states, “I’m graduating with unique qualifications: a background in both engineering and business. I completed a two-and-a-half year internship at Carpenter, where I met my business partners. And I’m using a lot of what I learned in the business minor with CarToCamp. Starting this business was the best way to do all the things I love.”

He adds that he chose Penn State Berks because it provided all the resources of a major university, right in his back yard.

Bonslaver and his co-founders have set up their business in Reading. For more information, visit www.cartocamp.com.