Students Recognized for Leadership and Service 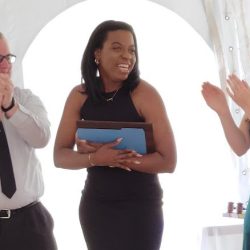 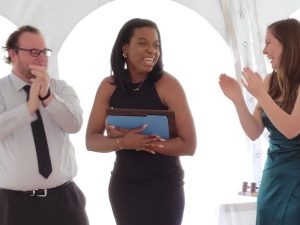 Ja’nique Jules was this year’s recipient of the Eric A. and Josephine S. Walker Award.

Penn State Berks recently held an award ceremony for its student leaders. The following students were recognized with Berks service and leadership awards.

Ja’nique Jules was named the 2022 recipient of the Eric A. and Josephine S. Walker Award. The award, established in 1980 by Penn State President Eric Walker, is presented annually to an undergraduate student whose outstanding qualities of character, scholarship and leadership contribute to the prestige of the campus.

Jules, of Piscataway, NJ, is graduating with a dual major in writing and digital media and political science, a Spanish minor and a certificate in social justice. She was a leader on campus, serving as executive director of the Lion Ambassadors student organization, and as an orientation leader and peer mentor. She was a member of the Blue & White Society and Black Student Union. Most importantly, she is a strong advocate for social justice, passionate about public service, and committed to fostering diversity, equity and inclusion.

Samantha Hagenbush is the 2022 Howard O., Jr., and Jean S. Beaver Award for Community Service recipient. The award honors a student for their distinguished contributions through community service. Hagenbush served as an ambassador for Robbie’s Hope, a teen-led nonprofit organization that aims to broaden and deepen awareness of teen anxiety, depression and suicide. She has worked with the office of counseling services to host a virtual walk in 2021, and in 2022, she coordinated a team to support the Out of the Darkness Walk, sponsored by the American Foundation for Suicide Prevention.

Katie Anders was honored with the J. Dean Stephans Memorial Award for Student Leadership. The award was created with the intention of honoring a student who demonstrates strong leadership skills, while encouraging the involvement of others. Anders’ co-circular portfolio includes serving as president of Campus Activities Board, a resident assistant, a Lion Ambassador, and the outreach captain for Berks Benefitting THON – all while maintaining a high GPA.

Adam Brezina received the 2022 Blaine Steensland Award for Outstanding Student Leadership and Service. The award was created in 2006 by the members of the Student Government Association to recognize outstanding achievement by a Penn State Berks student. Brezina serves as a Lion Ambassador, first-year mentor, resident assistant, and executive board member for the Campus Activities Board. He is known for motivating and encouraging others to engage in the community.