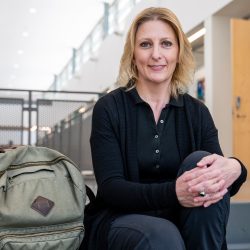 When Deborah Cebular walked across the stage to receive her Penn State Berks diploma in biochemistry and molecular biology on Saturday, May 7, it was the culmination of a dream that was 30+ years in the making and a complete career change.

Originally from Grove City, Pa., Cebular explains that she had planned to go to college to study science and then “life happened.” She took a year off, and then she was approached by the Art Institute of Pittsburgh, where she earned an associate degree in interior design. Then she met her future husband and started a family.

Cebular had worked as a professional designer of custom cabinets for 27 years for such companies as Kountry Kraft Custom Cabinetry and Hinkle Custom Cabinets, when the building industry hit a downturn and she was laid off around 2017. Later that year, she was diagnosed with thyroid cancer. She explains that she was lucky that her cancer was caught early and she had the realization that she was “still here because of science.”

“It made me rethink my life and I decided that I wanted to go back to school and study science,” Cebular explains.

When asked why she chose Penn State Berks, she states, “I always wanted to go to Penn State. It has a great reputation and is known for research in the sciences. It is also convenient and an easy commute from my home in Mohnton.”

While she states that she “had no idea what she was walking into,” she was determined to earn her degree in biochemistry and molecular biology. She even made the Dean’s List each semester.

Cebular also had the opportunity to conduct research with faculty members on a study titled “The Effect of Obesity on Lifespan in Drosophila melanogaster,” otherwise known as the common fruit fly. She worked with Dr. Maureen Dunbar, associate professor of biology and program chair of the college’s degree programs in both biology, and biochemistry and molecular biology; and Dr. Justin DiAngelo, associate professor of biochemistry and molecular biology. She presented their research at the Higher Education Council of Berks County’s research conference in April.

“My laboratory experiences introduced me to team-based settings, with exposure to current scientific methods and equipment,” comments Cebular. “My professors also consistently shared examples of their own professional and personal experiences along the way that not only supplemented the course material, but also gave me future insights of what to expect out in the real world after I graduate.”

After graduation, she plans to look for a job working in a laboratory setting on cell and gene therapy, enzymology, or genetics.

You might say that an interest in science is in the genes. Cebular’s oldest son is studying to become a veterinarian at Ohio State University, and her younger son is studying biochemisty at Alvernia University.

She adds that there are many Penn State alumni on her husband’s side of the family.

The B.S. in Biochemistry and Molecular Biology applies the basic principles of chemistry and physics to the study of living cells and their components to explain biology at molecular, genetic, and cellular levels. Students develop a strong foundation in quantitative and analytical biological sciences, including molecular biology, biochemistry, enzymology, metabolism, cell biology, and molecular genetics. Penn State Berks is the only campus outside University Park to offer this degree.