As Pa. primary 2022 quickly approaches, the top candidates for governor are bringing in six and even seven-figure donations. 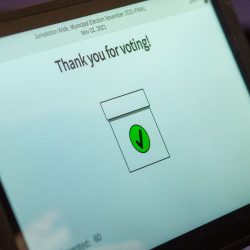 IMAGE: The donations underscore the stakes of landing Pennsylvania’s top job at a time when voting and reproductive rights stand to be dramatically reshaped in state capitols across the country.

In the month of April, six- and even seven-figure campaign donations routinely flowed into the coffers of leading Republicans competing in the nine-way primary race, as well as the campaign account of Democratic Attorney General Josh Shapiro, who is running unopposed on May 17.

The donations underscore the stakes of landing Pennsylvania’s top job at a time when voting and reproductive rights stand to be dramatically reshaped in state capitols across the country. The high figures also showcase Pennsylvania’s lax campaign finance laws, which place no monetary limits on giving, paving the way for the kind of large-scale infusions of cash that allow front-runner candidates to edge out cash-strapped competitors.

Another leading Republican, businessman Dave White, snagged $1 million in contributions within a two-week period in April from a top Philadelphia real estate developer and landlord.

And Shapiro received a half-million-dollar donation from a D.C.-based union representing public employees, as well as $200,000 from director Steven Spielberg and his wife, Kate Capshaw.

The influx of cash, including from deep-pocketed, out-of-state interests, is not surprising. Pennsylvania has long been a nationally watched swing state. And this year’s governor’s race is swiftly turning into a referendum on whether voters will choose a Democrat to be a stopgap on conservative policies emanating from the state’s Republican-majority legislature — or cement the GOP’s control of state government.

Shapiro has campaigned heavily on pledges to use the office’s veto pen to reject legislation rolling back abortion rights in the state ahead of an expected U.S. Supreme Court decision that would overturn Roe v. Wade.

He and other Democrats, both in-state and nationally, are also keeping a close watch on any legislation that would restrict voting access ahead of the next presidential election in 2024. Access to no-excuse mail ballots — a frequent target of unfounded GOP accusations of election fraud — is already on the line.

A Republican-initiated lawsuit challenging the mail ballot law approved in 2019 is now before the state’s highest court. Should the Pennsylvania Supreme Court uphold the law, the top GOP gubernatorial candidates all say they would support repealing it.

In all, the 10 gubernatorial candidates have raised more than $44 million since the start of 2021. That amount is expected to rise sharply after the primary and in the months leading up to the critical midterm election in November.

Below is a breakdown of top donors to the leading candidates for governor in the latest campaign cycle, which stretched from late March through the first few days of May. Donations will continue in the final days before the May 17 primary, but candidates report them separately with state election officials as late-arriving contributions. 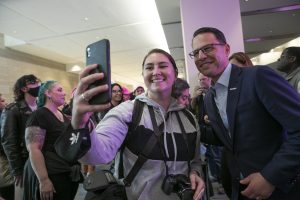 In the month of April, Josh Shapiro raised just under $3 million, spent $3.1 million, and had $15.8 million on hand — the most of all 10 candidates for governor. HEATHER KHALIFA / Philadelphia Inquirer

JOSH SHAPIRO: In the month of April, the Democrat raised just under $3 million, spent $3.1 million, and had $15.8 million on hand — the most of all 10 candidates for governor. 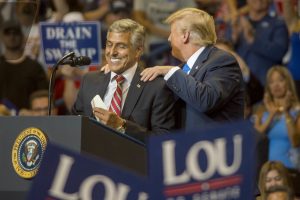 His largest donation, $134,000, came from a political action committee called the Northeast Leadership Fund. The PAC raises money primarily from entrepreneurs, including Louis DeNaples of Scranton, whose business interests include a waste-hauling business and a casino; and John Moran, who runs a warehousing, logistics, and transportation company near Lewistown. 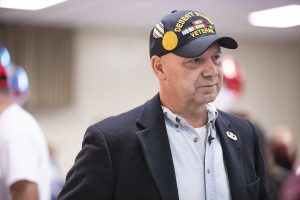 Doug Mastriano leads the polls, but also raised the least among the four GOP front-runners. Amanda Berg / For Spotlight PA

Most of his donations were small contributions under $250, in line with what he has reported in previous campaign finance reporting cycles.

His largest single donation in the latest reporting cycle was $25,000, and it came from Ola R. Yoder, who owns and runs Kountry Lane Standardbreds LLC in Nappanee, Indiana, which raises and sells racehorses. 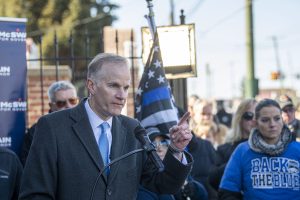 Bill McSwain raised $6 million in April — the most out of all the candidates — spent $7.2 million, and had $473,779 on hand. Jose F. Moreno/ Philadelphia Inquirer

His largest donors were two political action committees that received the bulk of their money from billionaire Jeffrey Yass, who heads the Philadelphia-area trading firm Susquehanna International Group and who, according to Forbes, is the richest person in Pennsylvania.

Walter W. Buckley Jr., the founder of an investment management firm in Bethlehem who now lives in Florida, gave McSwain $300,000. 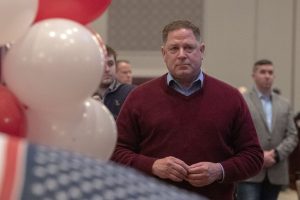 DAVE WHITE: The Delaware County businessman raised nearly $2.4 million — and spent nearly all of that — and had $282,054 on hand.

His largest donor: Michael Karp, owner of the University City Housing Company in Philadelphia and founder of a West Philadelphia charter school. Karp contributed $1 million to White in two donations made within weeks of each other, records show.

White, too, donated $1 million of his own personal money to his campaign, adding to the $4 million he’s loaned himself in earlier cycles.

A political action committee associated with former GOP national committeeman Bob Asher was the second-largest donor, kicking in $54,000 in late-arriving contributions (which are reported separately). Asher himself donated another $22,000.

The Transportation Construction Industries PAC was White’s third-largest donor, giving him $50,000. The TCI-PAC gets its money from contractors, materials suppliers, and service providers in the industry.

White also received sizable donations from George Ball, founder of a large nursery and gardening products company who donated $35,000; a Philadelphia-based union representing more than 4,500 painters, drywall finishers, wall coverers, glaziers, and glassworkers in that region, which gave $25,000; and an executive with Pace-O-Matic, the manufacturer of slots-like machines, who donated $25,000.

Of the group, Corman, a seasoned and skilled fundraiser, was the exception, raking in just under a dozen donations of $25,000 or more. On May 12 — just days before the primary — Corman announced he was backing Barletta and asked voters not to check his name on the ballot.