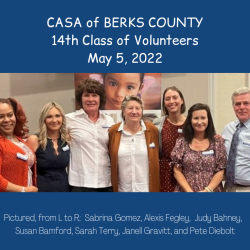 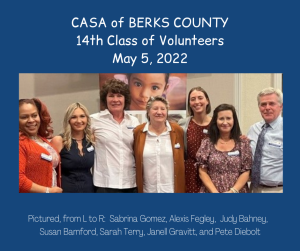 CASA of Berks County swears in the 14th class of volunteers for a team of fifty-two court-appointed special advocates.

With over 40 years of experience operating his own landscaping company, Pete Diebolt looks forward to his CASA volunteer responsibilities working with abused and neglected children.

“I am interested in exactly what CASA stands for and does:  To advocate for those who are disadvantaged … and let them learn how to speak for themselves, …and to advocate for their needs.”

Pete Diebolt was sworn in as an official CASA with six others during a court ceremony on May 5, 2022, at the Berks County Services Center. The group makes the 14th class of volunteers since CASA of Berks County was founded in 2015.

CASA, which stands for Court Appointed Special Advocate, is a program that trains volunteers to work with abused and neglected children to determine what is in the best interest of keeping them safe and thriving.

Judy Bahney, one of the six other volunteers sworn in with Pete and a former foster child, appreciates the need for CASA advocates in the child welfare system.

“I was adopted. I was in the foster care system.” Said Judy, “I always said that when I had the opportunity, I would give back because I felt like I was the lucky one to get out of the system and get adopted by a wonderful family.”

CASA volunteers serve as an extension of the eyes and ears of the judge in dependency court cases. Volunteers undergo more than 30 hours of training that includes observing dependency court hearings. After being sworn in, a judge appoints a CASA to advocate for the child’s best interests.  The CASA stays with the child until their case is closed and the child reaches a safe, permanent home. CASA volunteers work with legal and child welfare professionals, teachers, family members, and others to ensure judges have all the information to make life-changing decisions for each child.

Susan Bamford has years of experience working with Berks County Children and Youth and the Berks County Jail. Now retired and enjoying time with her grandchildren, Susan looked for something more.

Susan shared, “I have always loved working with and advocating for children. I strongly believe children need as many services, education, and help as a community can provide. I am looking forward to working with children in Berks County again. ”

Sarah Terry was excited to sign her oath at the swearing-in ceremony and brought her husband and two young children to witness the event.

“When I was a school counselor,” explained Sarah, “I would have a caseload of 600+ kids, and I felt like I never got to advocate for them because of having so many. So I am eager to make a difference in a child’s life and see that case to the end, helping the child until they’re in a safe and loving place for them.”

The following individuals were sworn in during the May 5 ceremony:  Judy Bahney, Susan Bamford, Pete Diebolt, Alexis Fegley, Sabrina Gomez, Janell Gravitt, and Sarah Terry.  For information on becoming a CASA volunteer child advocate or learning more about the work of child advocates in Berks County, go to www.casberks.org