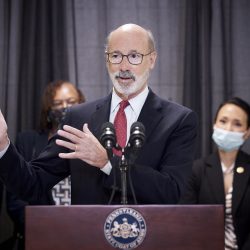 Gov. Tom Wolf, lawmakers and community leaders are calling on the General Assembly to pass legislation that would send checks of up to $2,000 to millions of Pennsylvanians.

Part of that plan includes the $500 million Pennsylvania Opportunity Program, which would provide direct payments for households with an income of $80,000 or less.

“The problem is that far too many people live paycheck to paycheck,” said Wolf. “And even now, with a small increase in living expenses – even if that’s all people were facing with the inflation, that can have devastating consequences. Pennsylvanians deserve better and there are ways we can help.”

Pennsylvania has $2.2 billion unused American Rescue Plan dollars that must be used by the end of 2024.

Democratic leaders in the state Senate and House have introduced legislation to support the Opportunity Program. Both were referred to the respective chamber’s Finance Committee last month.

Wolf and legislative leaders also are continuing their calls to increase the state minimum wage, which is currently $7.25 per hour and has not had an increase since 2009.

“If we learned anything from this pandemic, we need to go back to the basics,” said Kim. “We need safe, affordable housing, we need good schools, we need a living wage, we need to value our workers and we need each other.”