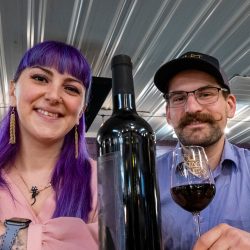 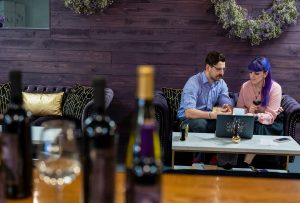 When you walk into Violet Vintage Wine Company, you are transported to the 1930s with the art deco-inspired design – tastefully accentuated by subtle shades of violet – and Big Band music playing in the background. Patrons can tell that it’s a labor of love for owners and Penn State alumni Katherine “Kat” (De Crescenzo), 2014, and Evan Kinzey, 2015, who share not only a love of wine, but a love for each other that shines through in everything they do.

But more importantly, they appreciate the care that the owners put into creating their own unique wines – both red and white – and handcrafted cocktails and sangrias with names like “Post Watermelon Sangria”– all served with a smile.

Neither Kat nor Evan planned to become vintners when they met at Penn State Berks in 2011. Kat was a global studies major and she completed an internship with a nonprofit organization for children in India. She states that this was one of the experiences that shaped her future.

Meanwhile Evan majored in kinesiology, and he worked as a trainer at a gym for a brief time before pursuing his passion – a career as a professional mountain biker. He also manages North American sales and warranty-related customer service transactions for Alex Rims, manufacturer of bike rims and wheels.

They met during Evan’s orientation weekend (Kat was a junior orientation leader at that time). Then she was assigned to be the peer mentor in his first-year seminar class, and after the class ended, they began dating. The rest, as they say, is history. They married in December 2016.

After graduation, Kat really wanted to work for a nonprofit organization, coordinating events. In addition to her internship in India, she had experience helping her family coordinate events for Cure SMA, an organization that supports children with spinal muscular atrophy, one of the leading causes of death for infants. She explains that her nephew died as a result of SMA, so it is a cause that was near and dear to her heart.

Then her mother saw an advertisement for an event coordinator at a local winery. Kat applied and she was hired initially to coordinate the winery’s events, and then to help manage the retail operation at several locations. When the winery needed a vintner, Kat asked them to take a chance on her. She had taken chemistry courses at Penn State Berks, and she loved the idea of creating unique wines.

“That’s where my love for wine started,” she stated. 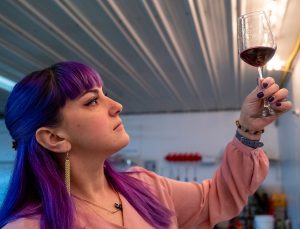 After creating small batches of wine for a few years, Kat says she “finally got a wine on the list and it won the Governor’s Cup – Pennsylvania’s highest award a wine can receive.” The Governor’s Cup is presented by the Pennsylvania Farm Show for the best in show for a fruit and a grape wine.

Receiving that award sealed the deal; Kat knew that creating wine is what she wanted to do. “Sometimes you find your true passion after college and that’s okay. Penn State Berks helped me find myself, even though I’m not working directly with my degree. Get a degree and see where life takes you.”

When a colleague of Kat’s bought the former Calvaressi Winery in Bernville, she found that she needed a production site that was more conveniently located to her other winery, and the facility became available. Kat was intrigued by the idea of acquiring the site and starting her own the winery.

She recalls that she brought the idea up to Evan and he didn’t say anything for weeks, so she assumed that he wasn’t interested. Then one day, after thinking it over and working out the logistics in his head, he said, “Let’s do it.”

Evan handles the business and monetary aspect of the winery. He continues to pursue his mountain biking and sales careers during the day, working at Violet Vintage in the evenings and on weekends.

Kat is devoted full time to Violet Vintage, following her passion of developing new wines and handling the creative aspects of the business, which officially opened on March 4, 2022.

Despite all the hard work, they still manage to have fun with the business and each other. On a tour, she showed us the equipment they purchased from another local winery: tanks that are named for her favorite “Hocus Pocus” characters: Winifred, Mary and Sarah, and wine barrels named Captain America and Captain Sparrow in tribute to her favorite movie characters.

The inspiration for the name of the business was inspired by the color of Kat’s hair, which has been violet for about five years. “My niece wanted me to make a wine for her 21st birthday and a friend who helped me make a label for the wine called me the ‘Violet Vintner.’” They explain that they chose ‘Wine Company’ rather than ‘Winery’ because they plan to expand the business to include a vineyard and retail locations.

Violet Vintage is a family affair. Kat’s sister created the art deco-inspired logo, the wine labels (some featuring the owners and family members) and the artwork. Her mother serves as maître d’, and her brother-in-law, otherwise known as ‘Chef Joe,’ and her sister run the kitchen. They serve small plates including raspberry goat cheese tartlets, butternut squash soup, sliders, and other seasonal favorites. 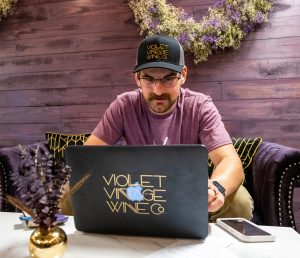 Evan and his family have experience in construction; his father was a home builder and his brother does wood burning – in fact, he created the intricate tap handles behind the bar. His mother owns a landscaping company and is licensed to grow consumable grapes so she will be helping them in the vineyard. They all came together and brought their expertise to work on renovating the site, building walls and cabinets and turning it into the beautiful winery it is today, complete with comfy violet couches, intimate tables, and bar seating.

When asked how their Penn State Berks education has helped them to create the business, Kat states that she wouldn’t be able to do what she does today without the courses she took and the experiences she had at Penn State Berks.

Evan commented, “In addition to meeting each other, the skills we acquired and the relationships we formed were invaluable. There were always a lot of events and activities for students, so we met a lot of people and we formed lifelong friendships. And the outreach that the college has with local nonprofit organizations and the community was so important, and something that we put into practice now with our business.”

“Grow your roots where you live,” added Kat, and Evan countered, “Anchor in and dig deep.”

In fact, both Kat and Evan are continuing their education through the Penn State Extension, taking courses in enology, the study of wines. In addition, they recently returned to Penn State Berks to make a presentation to an entrepreneurship course.

What does the future hold for Violet Vintage? They are planning to hold events like Murder Mystery experiences and live concerts in the outside pavilion. 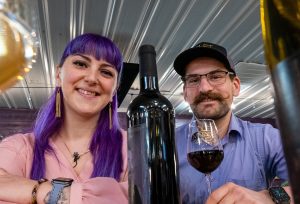 Almost one year after purchasing the winery, Kat and Evan have created an atmosphere where their patrons can enjoy what they say are the “three Fs of wine – friends, family and food.”