by The General Carl Spaatz Museum 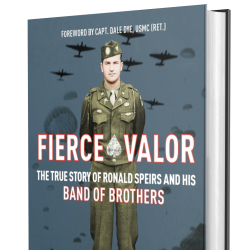 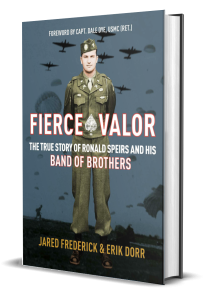 The new General Carl Spaatz National USAAF Museum in Boyertown will host a lecture and book signing by Author and Historian Jared Frederick on Friday evening July 29th at 7:00pm.

Jared Frederick, the author of numerous books, including Dispatches of D-Day and Hang Tough, will be at the new General Carl Spaatz USAAF Museum in Boyertown on July 29th. He will deliver a lecture on his new book: Fierce Valor: The True Story of Ronald Speirs and His Band of Brothers and be available for a book signing in the Museum afterward.

His comrades called him “Killer.” Of the elite paratroopers who served in the venerated “Band of Brothers” during the Second World War, none were more enigmatic than Ronald Speirs. Rumored to have gunned down enemy prisoners and even one of his own disobedient sergeants, Speirs became a foxhole legend among his troops. But who was the real Lieutenant Speirs? Packed with groundbreaking research, Fierce Valor unveils a compelling portrait of an officer defined by boldness on the battlefield and the inherent costs of war. His story serves as a telling reminder that few soldiers escape the power of their own pasts.

The 7:00 pm lecture will be presented in the Reception Hall of the Friendship Hook & Ladder Fire Company on Warwick St in Boyertown. The book sale and signing will take place afterward in the Spaatz Museum next door. There will be a $10.50 admission fee for the lecture and self guided tour of the museum during the book signing.