Democratic Gov. Tom Wolf has vowed to veto any efforts to further curtail access to the procedure, but the decision further raises the stakes in the tight governor's race in Pennsylvania. 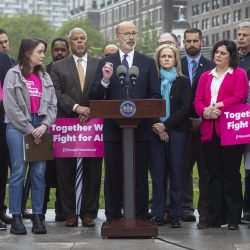 HARRISBURG — The U.S. Supreme Court has struck down Roe v. Wade, the landmark 1973 ruling that established the constitutional right to abortion.

The decision effectively gives states the power to determine how, where, and why someone can get a legal abortion, if at all.

“Abortion presents a profound moral question. The Constitution does not prohibit the citizens of each State from regulating or prohibiting abortion. Roe and Casey arrogated that authority,” Justice Samuel Alito wrote in the majority opinion. “We now overrule those decisions and return that authority to the people and their elected representatives.”

It won’t have an immediate impact in Pennsylvania, where Democratic Gov. Tom Wolf has vowed to veto any efforts to further curtail access to the procedure.

But that could change as early as 2023 should state Sen. Doug Mastriano (R., Franklin) win the November election to become Pennsylvania’s next governor.

Mastriano has said he would sign a bill banning abortion at six weeks with no exceptions for rape, incest, or life of the pregnant person. His Democratic opponent, state Attorney General Josh Shaprio, supports maintaining access to abortion.

According to a May Franklin & Marshall College poll, 85% of registered voters said they support abortion being either completely legal or legal under some circumstances (which were not defined in the poll.) Only 14% of respondents said abortion should be illegal under any circumstance.

Under Pennsylvania law, abortion is legal up until 24 weeks of pregnancy. The procedure may be performed after that if the life or health of the pregnant person is in danger.

The General Assembly, long controlled by Republicans, has often backed stricter abortion laws, including a 20-week ban and proposals to ban abortion in case of an in-utero Down’s Syndrome diagnosis.

Such bills have been consistently vetoed by Wolf, a former Planned Parenthood escort and vocal ally of abortion access.

In response to the high court’s ruling, he vowed to continue to protect abortion access in the state — but he is term-limited under the state constitution from seeking reelection.

“The right to bodily autonomy — and privacy as a whole — is under attack in this country,” Wolf said. “We must do more to protect the rights of women and pregnant people in every state across the country that doesn’t have a governor willing to wield their veto pen.”

“As we approach a critical election cycle here in Pennsylvania, I cannot stress enough how important it is to exercise your personal right to vote. Elections matter.”

Friday’s U.S. Supreme Court ruling means abortion will be an even bigger issue during the November gubernatorial election, something both sides recognize.

“Whoever holds the governor office plays a huge role in what the legislators will do,” state Rep. Kathy Rapp (R., Warren) and chair of the House Pro-Life Caucus said.

Rapp added that she and her allies “have a lot of options” and “have not settled on one piece of legislation at this time.”

Mastriano has previously compared the push to ban abortion to the fight to abolish the slave trade in the United Kingdom.

Shapiro has echoed Wolf’s stance on defending abortion rights as inscribed in current state law, saying Friday in a statement that he would “fight any attempt to erode women’s rights in our Commonwealth.”

As for expanding access past Pennsylvania’s current law, he demurred in a press call earlier this year.

“I think given this legislature, it will be hard to play offense, if you will,” Shapiro said. “But understand that under our state law, in effect, women would still have the same rights as they have under Roe v. Wade. And so really the issue here is protecting what we have.”

Lawmakers opposed to abortion access have also proposed a state constitutional amendment stating that “the policy of Pennsylvania is to protect the life of every unborn child from conception to birth, to the extent permitted by the Federal Constitution.”

The governor plays no role in the lengthy amendment process. Instead, the legislature must pass an amendment in two consecutive sessions, before it goes in front of voters in a referendum for final approval.

The proposed amendment is currently in front of the state Senate awaiting a final vote.

This story will be updated.